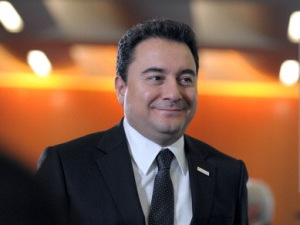 Turkey on Friday sought to reassure investors at the World Economic Forum in Davos over the health of the economy despite the Turkish lira hitting new lows on political turmoil.

Deputy Prime Minister Ali Babacan told the assembled global elite that despite recent volatility on the currency markets, investors were not rushing to pull their money out.

"There has not been a capital outflow ... people who are actually investing in Turkey are keeping their money in Turkey," insisted the minister.

Earlier Friday, the Turkish lira dived through the key barrier of 2.3 to the dollar amid the worst political crisis in a decade and despite massive central bank intervention.

The government of Prime Minister Tayyip Recep Erdogan has moved to curb the judiciary in the wake of a massive corruption scandal that has ensnared several of his key business and political allies.

Babacan acknowledged that "recent political events have triggered some market volatility" but dismissed it as a "repricing process" that would be temporary.

He said the main reason for the plummeting value of the lira was that domestic Turkish companies were selling their stocks of the local currency to buy dollars or euros.

"Especially because of the local political events, they think it is better to buy dollars or euros now rather than waiting," said Babacan.

The lira has lost more than 10 percent since mid-December in turmoil not seen since a 2000-2001 financial meltdown Turkey suffered, and economists forecast further declines down the line.

While there would be "some political noise" this year from two elections, he forecast growth of "around four percent", with a lower budget deficit and relatively low debt.