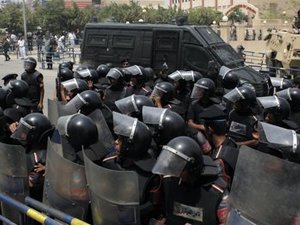 Egypt's military has arrested five people in connection with clashes in the north Sinai city of El-Arish that left four people dead, the official MENA news agency said on Saturday.

Armed forces arrested four men suspected of involvement in an attack on an El-Arish police station, while another man was arrested driving close to the police station with two machine guns in his possession, MENA said.

The arrests late on Friday came after gunmen tried to storm a police station, sparking a confrontation with security forces and the army.

Three civilians and an army officer were killed in the clashes, and 19 people were wounded.

On Friday night, around 150 men in trucks and on motorbikes rampaged through El-Arish, firing assault rifles in the air, driving terrified residents into their homes.

They rode through the deserted streets of the north Sinai city waving black flags which read "There is no God but Allah", before attempting to storm the police station.

Earlier, the masked men used a bulldozer to damage a statue of the late president Anwar Sadat, who was assassinated by Islamist militants in 1981.

The violence came after a peaceful demonstration at noon in one of the city's squares, part of countrywide protests by Islamists who want any future constitution to assert that Egypt is a Muslim state.