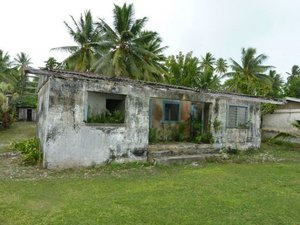 In a once-thriving village on the Pacific island of Niue, homes lie abandoned, their stucco-clad walls mildewed and crumbling as the jungle slowly reclaims them.

"These villages used to be bustling with people -- now you go there in the afternoon and there's no one," says the Niue Tourism Authority chairman Hima Douglas.

The number of people living on the lush coral atoll, about 2,500 kilometers (1,550 miles) northeast of New Zealand, has been declining for decades as inhabitants seek a better life overseas.

The population, which peaked at more than 5,000 in the mid-1960s, has dwindled to just 1,200, according to a New Zealand parliamentary report, raising doubts about the island nation's economic viability.

Douglas said a major cyclone in 2004, which destroyed much of Niue's infrastructure, accelerated the exodus, and the threat of future natural disasters was discouraging people from returning.

"Of course it's concerning but it's not something we can do too much about until we can build an economy that will give them the confidence to come back," Niue's Premier Toke Talagi told reporters this month.

"There aren't simple and easy answers to people leaving. We've got to build a strong economy and hope to attract them back."

Known locally as "The Rock", Niue was settled by Polynesian seafarers more than 1,000 years ago and the palm-dotted island's name in the local language means "behold, the coconut".

The British explorer captain James Cook tried to land there three times in 1774 but was deterred by fearsome warriors, eventually giving up to set sail for more welcoming shores and naming Niue "savage island" on his charts.

But modern day Niueans are desperate for visitors, with Talagi unveiling plans this month to turn it into a boutique tourism destination in a bid to put his nation on a sound economic footing.

Using aid from New Zealand, with which Niue has a compact of free association giving its people dual citizenship, Talagi has overseen construction of a new tourism center and expansion of the island's Matavai Resort.

Paths have also been cut through the jungle to give visitors access to swimming spots on the rugged limestone coastline, and cruise liners are being encouraged to include Niue on their itineraries.

"We can become self-sustaining in the long term (and) reduce New Zealand assistance to Niue," Talagi said, estimating that visitor numbers could quadruple to 20,000 a year in the next decade.

Addressing a visiting delegation of New Zealand business executives this month, Talagi acknowledged doubts about the nation's ability to meet the challenge.

"I know some of you are a bit skeptical about our ability to become self sustaining... (but) tourism is not going to fail and I don't expect it to fail given the numbers that are being generated," he said.

The New Zealand parliamentary report, released last December, estimates that about 50,000 Niueans and their children now live in Australia and New Zealand, creating a shortage of skilled labor in one of the world's smallest states.

"Niue is caught in a vicious cycle, with its economic difficulties both exacerbated by, and reflected in, the long-term decline of its population," it said, adding that 40 years of New Zealand aid "has yielded almost no return".

The report's authors suggested Niue should concentrate on promoting itself as a retirement destination for elderly New Zealanders, who could help revitalize the economy.

"The climate is excellent, existing buildings could be brought into service, and health facilities are satisfactory," it said.

Asked about the suggestion, Talangi said "we'll look at everything", although one long-time resident, who asked not to be named, was unenthusiastic at the prospect.

"How depressing to think that we might be turned into a major geriatric ward," she said. "Not that I have anything against old people, mind."

Another resident said that whatever steps Niue took to improve its economy must result in major changes, pointing out people could earn more by moving to New Zealand and claiming unemployment benefits than working on the island.

"It's pretty hard when your cuzzies (cousins) call you and say 'we're getting more on the dole in Auckland than you're getting paid'," he said.