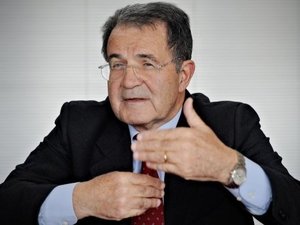 Italy's former prime minister Romano Prodi on Saturday accused Germany of "egoism" over a massive sale of Italian bonds by Deutsche Bank and said Italy was in a far stronger economic position than Spain.

The former European Commission president also said that the high rates at which Italy is being forced to issue bonds because of market jitters meant that sweeping budget cuts approved earlier this month would be "in vain".

"We must respond to German egoism," Prodi wrote in an editorial for the Il Messaggero daily, pointing to figures showing Deutsche Bank had sold off almost its entire Italian bond holdings worth eight billion euros ($11.5 billion).

He said the move gave "an impressive signal of no confidence" for investors.

Prodi also pointed to key differences between Italy and Spain, which have both faced serious pressure on financial markets in recent weeks, saying Spain had a bigger budget deficit, a weaker banking system and higher unemployment.

Italy has one of the highest levels of public debt level in the world and one of the lowest growth rates in Europe. The government has also been weakened by infighting and a series of scandals involving Prime Minister Silvio Berlusconi.

Italy is the eurozone's third biggest economy after France and Germany.