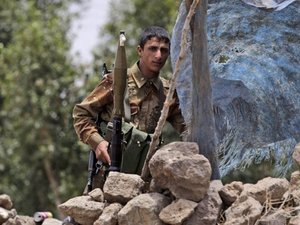 At least 42 people have died in violence near Yemen's southern city of Zinjibar, most of which has fallen under the control of spected al-Qaida militants, military and local sources said on Saturday.

Eleven people including top officers were killed in fierce clashes between the army and militants in Dofas, a village 15 kilometers south of Abyan's provincial capital of Zinjibar, they said.

Medics at a military hospital in the southern port city of Aden confirmed the casualty toll.

A local official in Dofas said five members of the Islamist network were also killed and four wounded in the attack.

Twelve of the tribesmen were killed and 20 others wounded in clashes with the militants, a top security official in the area told AFP.

"Around 200 tribesmen came from the (coastal) village of Shaqra heading towards Zinjibar when they clashed with al-Qaida elements" on the city's outskirts, Abdullah Naser al-Jadani said.

Tribal sources said the militants forced the tribesmen into a government building seized by the network, prompting the army to launch an air raid.

Jadani said three tribesmen were "mistakenly" killed in the air strike while another nine were shot dead by al-Qaida militants.

Later on Saturday, tribal sources said 17 other bodies were retrieved from the rubble of the building targeted by three air raids, acing the army of having carried out a "massacre" which cost the lives of 29 tribesmen.

However, Jadani insisted that the raids targeted "al-Qaida fighters and not civilians."

A medic at a hospital in the town of Jaar, controlled by the militants, said two al-Qaida militants were killed and 14 wounded in the clashes and air strikes.

Militants belonging to the "Partisans of Sharia" (Islamic law), which is spected of links to al-Qaida, seized control of much of Zinjibar in May. Thoands of residents have since been displaced by fighting.

Deputy Information Minister Abdo al-Janadi said last week that the United States had provided logistical support to Yemen's 25th Mechanized Brigade, which had been besieged by the militants in Zinjibar.

U.S. commanders have repeatedly expressed concern that the jihadists have been taking advantage of a protracted power vacuum in Sanaa to expand their operations.

Since January, protesters have been demanding the oter of veteran President Ali Abdullah Saleh, who has been in hospital in Saudi Arabia since early June being treated for wounds stained in a bomb blast at his palace.