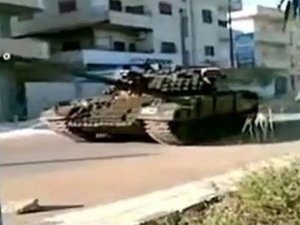 Syrian troops shot dead three people on Saturday when villagers hurled stones at their convoy as it advanced on the eastern city of Deir al-Zour, an activist told Agence France Presse in Nicosia.

Rami Abdel Rahman, of the Syrian Observatory for Human Rights, said a convoy of about 60 military vehicles, including tanks, was moving towards Deir al-Zour when people from Tibneh village attacked them with stones.

"Villagers from Tibneh threw stones at the military convoy that was advancing on Deir al-Zour and the soldiers opened fire on them to disperse them, killing three people," Abdel Rahman said by phone from Britain.

Tibneh is about 40 kilometers west of Deir al-Zour, where hundreds of thousands gathered Friday for the funeral of three people killed by security forces the previous day, according to activists.

Deir al-Zour, Syria's eastern oil hub, has been at the forefront of more than four months of protests against the autocratic regime of President Bashar Assad.

Meanwhile, activists said that security forces killed at least 20 people and wounded 35 others on Friday as hundreds of thousands of turned out for anti-regime protests.

The deaths were reported on Saturday by two Syrian human rights organizations, one of them also saying that hundreds of people were arrested by security forces in Damascus.

"Nineteen martyrs fell on Friday," the National Organization for Human Rights said in a statement received by AFP in Nicosia.

"The Syrian authorities had decided to go ahead and kill protesters during the day marked by demonstrations dubbed 'Your silence is killing us'," it said.

The toll included one person killed in Damascus and seven in the region around the capital, including five in Kiswah and two in Douma, said Ammar Qorabi, who heads the human rights group.

Another three were killed in the flashpoint southern town of Daraa, three more died in the eastern city Deir al-Zour, two others in the nearby town of Bukamal, and one in the western coastal city of Latakia.

One person was killed in a village in the central governorate of Homs and another in the flashpoint city of Hama, also in central Syria, said Qorabi, adding that he had a list of names for those killed Friday.

For its part, the Syrian Observatory for Human Rights reported 12 civilians were killed and 35 were wounded on Friday -- including 11 whose names figured on the list provided by Qorabi's group.

The 12th victim, a young man, was shot dead in Qadam, a Damascus neighborhood, the Britain-based Observatory said.

"Soldiers and a large number of security agents entered Qadam at 3:00 am on Friday (00:00 GMT) and cordoned off the area," said the head of the group, Rami Abdel Rahman.

"More than 500 people were arrested during the operation, and one young man was killed at a security roadblock," he said.

Abdel Rahman said the authorities also banned public funerals in the district, and said the young man was quickly buried in the presence of security officials to forestall any demonstrations.

"The army put up barricades at all entrances to the area, and heavily armed members of the security forces carried out searches and made arrests," he said, adding they had lists of names of people hostile to the regime.

"Security forces broke down doors when they weren't opened quickly enough, and then they posted people on the roofs of houses during the four-hour operation," he said.

The security forces were deployed en masse across the country for another day of protest after the Muslim weekly Friday prayers against the regime of President Bashar Assad.

Friday's protests, called for by Facebook group The Syrian Revolution 2011, were aimed at putting pressure on the rest of the world to act in the face of the deadly crackdown on dissent by Assad's government.

"Where are you, defenders of freedom?" and "Enough of your silence ... silence is a shot in our chests," activists said on the website, a driving force behind the protest movement.

Activists said that hundreds of thousands swarmed the streets across Syrian on Friday, with half a million marching in the flashpoint city of Hama.

Since the protest movement emerged in March, 1,888 people have been killed, 1,519 of them civilians and 369 members of the security forces, according to the Observatory.

In addition, more than 12,000 people have been arrested and thousands more have fled, according to non-governmental groups.

Attacking the Syrian army with stones and machine guns in Syria , as if they were the Israeli army or an occupying army , is unacceptable . Killing such terrorists is a normal thing . Bravo the Syrian army .

The Syrian army is at home in Syria and has the right to go anywhere in the country , and it is her duty to keep the calm and order and to preserve the homes and the wealth of the citizens from the chaos and terrorists .

i remember this tank was stationed in rond-point mkalles.
BILAD EL ARZ WILL PREVAIL NO DOUBT ABOUT IT.

@Le Phenicien
"The Syrian army is at home in Syria and has the right to go anywhere in the country"... shame you don't apply the same rules to Lebanon and the Lebanese army....

I want to apply for a Syrian Citizenship

who's stopping you? good riddance!