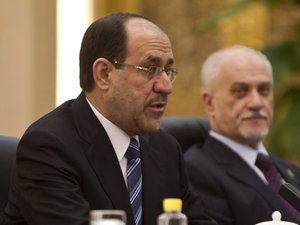 MPs slashed the size of Iraq's national unity cabinet by a third on Saturday after a visit to parliament by Prime Minister Nuri al-Maliki who has called for his bloated government to be slimmed down.

It came with a key decision looming on whether any U.S. soldiers will remain in Iraq beyond a year-end withdrawal deadline and ahead of next week's start of the Muslim fasting month of Ramadan when life almost comes to a standstill.

"There has been a consensus and this is something good," Maliki told a news conference following a closed-door meeting with MPs during a rare visit by the premier to parliament.

"Today, parliament listened to our ideas and the result was them accepting our program and removing, dismissing or dispensing with the ministers of state," he added, lamenting the "flabbiness" of the government.

Of 17 ministers of state posts, including eight ministers without portfolio, only three will remain -- women's affairs, parliamentary affairs and provincial affairs.

A statement posted on parliament's website said of 183 MPs present, a majority voted in favor of the measures. No tally of votes was available.

A parliamentary official said the cuts were the first in a three-stage process that would see 10 cabinet-level ministries merged into five, and a swathe of senior officials sacked.

The second stage of the process would require a new law to be passed, however, the official noted, speaking on condition of anonymity.

Maliki said the blocs that lost positions in the consolidation would be compensated with other jobs in ministries or government bodies, but did not give details.

"We tried to keep the balance between different sides and there will be compensation if one of the sides lost out," he told reporters.

The 46-member cabinet was the biggest in Iraq's history and only approved in December after protracted horse-trading that followed a March 2010 general election in which no party gained a clear majority.

Maliki originally sent a letter to MPs outlining his proposals on July 13, noting the government's size had become "a burden" on work and Iraq's budget as it seeks to rebuild from three decades of war and sanctions.

Iraq's government has been criticized for inaction on key issues of rebuilding the country, with nationwide protests since February railing against official corruption and ineptitude.

The inaction has also affected the issue of whether or not some U.S. forces will be asked to stay beyond 2011.

Ali Mussawi, media adviser to Maliki, said on Friday that a meeting of political leaders to debate the issue, originally scheduled for Saturday, had been indefinitely delayed.

U.S. officials have pressed their Iraqi counterparts to decide soon.

Iraqi leaders, however, have already missed a self-imposed July 23 deadline to reach agreement and, in the past, political deals have rarely been reached during Ramadan.