Mubarak to be Tried at Cairo Police Academy 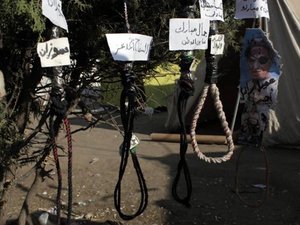 The trial would open on Wednesday and be held "inside the Police Academy in Masr el-Gedida" in northern Cairo for security reasons, said the court's president, Abdel Aziz Omar.

"It has been finally decided that the trial of the former president Hosni Mubarak, his sons Alaa and Gamal, fugitive businessman Hussein Salem, former interior minister Habib al-Adly and six of his assistants will be held from August 3 inside the headquarters of the Police Academy in Masr el-Gedida," Omar said, quoted by MENA state news agency.

On Thursday, justice ministry official Mohammed Manei had told MENA the trial would take place in "the building of the General Authority for Investment and the free trade areas in the Cairo Expo grounds."

But Omar said the Police Academy would be the venue for the trial "because it is difficult to guarantee the protection of the other place."

Mubarak, ousted in February by a popular revolt, has been under arrest in hospital in the Red Sea resort town of Sharm el-Sheikh, where he is being treated for a heart condition.

He is charged with ordering the shooting of anti-regime demonstrators during the revolt, in which 850 people were killed, abuse of office for illicit gains and squandering public funds.

The justice minister has said Mubarak may be executed if found guilty of the murder charge.

He will stand trial with his two sons, business associate Salem who was arrested in Spain, as well as Adly and six of his former security chiefs.

Adly has already been sentenced to 12 years on corruption charges.

Mubarak's transfer to Cairo to face trial was a key demand of activists who brought down his regime.

Health Minister Amr Hilmi told reporters this week that Mubarak's health was "good" and that he was fit to be transferred to Cairo.

On Wednesday a medical source who is familiar with the former president's condition told Agence France Presse that Mubarak was "depressed" and state media said he was refusing to eat and has become weak.