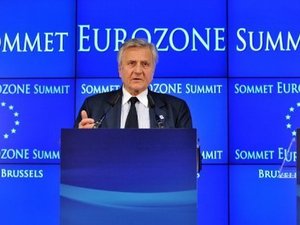 European Central Bank head Jean-Claude Trichet has a chance this week to weigh in at length on the latest Greek rescue.

Trichet is sure to face questions on the landmark second bailout of Greece in the press conference that will follow the ECB policy-setting meeting that should see interest rates stay on hold.

With Eurozone inflation falling, business confidence down and markets uncertain over how effective the Greek bail-out plan will ultimately be, the ECB is tipped to keep its main rate at 1.50 percent following a hike earlier in July.

Investors will also look to London, where the Bank of England is expected to maintain its main rate at 0.50 percent after the British economy posted weak second-quarter growth of 0.2 percent.

And they will certainly be looking to see how the U.S. debt drama plays out ahead of a Tuesday deadline set by the U.S. Treasury for a deal in Congress on the country's debt-ceiling.

But on Thursday, Trichet is sure to field a slew of questions about the central banker's real view of a new rescue package for Athens.

On July 21, leaders of the 17-nation Eurozone agreed on a plan worth 160 billion euros (230 billion dollars) to help Greece and to keep the debt crisis from spreading to more critical economies like Italy and Spain.

The plan follows an initial bail-out worth 110 billion euros provided by the European Union and International Monetary Fund for Greece, which carries a public debt of 350 billion euros, or 150 percent of the nation's annual output.

---Looking out for inflation---

Parts of the latest plan, notably a "voluntary" contribution by private banks, run counter to what the ECB had said it would accept.

But the central bank did succeed in getting several points adopted such as getting the European Financial Stability Facility (EFSF) to take over purchases of bonds issued by deeply-indebted governments, a role the ECB took on reluctantly last year.

But German central bank governor Jens Weidmann has warned that the accord "weakened the basis of a monetary union built on fiscal independence" and said it could be harder to enforce fiscal discipline in the future.

Capital Economics economist Ben May predicted that Trichet, who has not commented at length so far, "probably will not criticize the contentious debt exchange component of the deal, neither will he wholeheartedly back the plan."

Analysts will also be listening for indications on whether the ECB rate hike early in July will be followed by another before the end of the year.

Trichet suggested as much when he said on July 7 that the bank "will continue to monitor very closely" any indicators that Eurozone inflation was on the rise.

But inflation in the Eurozone eased to 2.5 percent in July after two months at 2.7 percent, the Eurostat data agency said Friday, and while that is still above the ECB target of just below 2.0 percent, it suggests that price pressures might be starting to ease.

A slowdown of global activity has taken some of the steam out of inflation.

The European Commission said last week that business confidence in the Eurozone economic outlook fell for the fifth consecutive month, adding to concern that the region's debt-crisis could be taking a toll.

The drop in confidence was across all business sectors, the commission said, was bigger than expected by economists, and included core economies like the Netherlands, Germany and France.

ECB policymakers might then decide to hold off on another rate hike this year, especially since it could make things tougher for Italy and Spain, and only deepen the debt crisis.