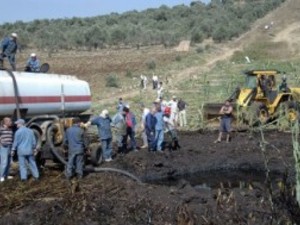 The Moro Islamic Liberation Front refused to say what they would do if the government ignores their request.

The 11,000-strong rebel group has waged a bloody battle for self-rule in southern Mindanao region, homeland of minority Muslims in the predominantly Roman Catholic Philippines. A cease-fire, guarded by international monitors led by Malaysia, has held since the the last major fighting killed hundreds and displaced about 750,000 people after the talks bogged down in 2008.

The United States and Australia have backed the talks, fearing rebel strongholds could harbor al-Qaida-linked militants.

The Department of Energy recently invited foreign and local companies to invest in oil and gas explorations in 12 offshore and three onshore areas that include the vast Sulu Sea in the south and western Palawan province, which cover regions the rebels want to control. The Philippines imports most of its oil and gas.

However, the rebels called on prospective foreign companies not to take part in energy explorations they say would deprive the country's minority Muslims of natural resources. They lament that they have lost land and opportunities in decades of massive land-grabbing by mostly Christian settlers.

The rebels also oppose the planned sale of two state-run hydropower plants in areas they claim as their own.

"The Philippines has become one huge corporation, there are vested interests everywhere," rebel chief negotiator Mohagher Iqbal told The Associated Press. "We're at the mercy of foreign companies."

Government negotiator Marvic Leonen said that no accord with the Muslim rebels prohibits the government from pursuing development efforts. Economic projects are meant to ease the plight of impoverished Filipinos, including Muslims in the south, he said.

The Muslim rebels' opposition to energy explorations is similar to a campaign by communist New People's Army guerrillas to stop mostly foreign mining companies' operations in Mindanao, where they have destroyed heavy equipment and threatened mining personnel.

Iqbal refused to say if his group would resort to violence, adding they would first exhaust all "diplomatic means."

"We don't want to go into that at this point," Iqbal said.

In current negotiations, the rebels have demanded control over 30 percent to 40 percent of the Mindanao areas and a 75 percent share in revenues earned from the exploitation of natural resources, Iqbal said.

The government has not responded yet, he said.

A similar demand was part of a 2008 preliminary accord on ancestral domain that was turned down by the Supreme Court, sparking rebel attacks on Christian communities that had provoked a major military offensive.