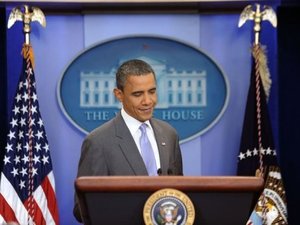 U.S. President Barack Obama announced Sunday that he and top lawmakers had reached an 11th-hour deal to avert a first-ever U.S. debt payment default that would have sown chaos across the world economy.

"I want to announce that the leaders of both parties in both chambers have reached an agreement that will reduce the deficit and avoid default, a default that would have had a devastating effect on our economy," he said.

With time running short before a midnight Tuesday (04:00 GMT Wednesday) deadline, Obama warned "we're not done yet" and urged lawmakers "to do the right thing and support this deal with your votes over the next few days."

Leaders of the Democratic-held Senate and Republican-led House of Representatives were working to rally polarized lawmakers behind the compromise, with critical votes expected as early as Monday.

"To pass this settlement, we'll need the support of Democrats and Republicans in both the House and Senate. There is no way either party -- in either chamber -- can do this alone," said Democratic Senate Majority Leader Harry Reid.

"My hope would be to file it and have it on the floor as soon as possible," House Speaker John Boehner told fellow Republicans in a conference call, calling it a remedy to avert "a job-killing national default that none of us wanted."

As described by Obama and congressional leaders, the deal would raise the country's $14.3 trillion debt ceiling by about $2.4 trillion in two steps, while calling for roughly the same about in spending cuts over ten years.

The framework would fulfill one of the president's top goals: Raising cash-strapped Washington's ability to borrow by enough to avoid having another politically fraught debt battle before he faces reelection in November 2012.

Republicans crowed that the framework did not explicitly call for raising tax revenues -- at least in the first wave of deficit cuts -- despite Obama's repeated calls for increasing revenues from the rich and wealthy corporations.

Asian markets immediately cheered news of the deal, with the dollar climbing against the Japanese yen in Tokyo and Australian shares surging 1.4 percent shortly after the announcement.

The U.S. government hit its debt limit on May 16 and has used spending and accounting adjustments, as well as higher-than-expected tax receipts, to continue operating normally -- but can only do so through August 2.

Business and finance leaders have warned default would send crippling aftershocks through the fragile U.S. economy, still wrestling with stubbornly high unemployment of 9.2 percent in the wake of the 2008 global meltdown.

Without a deal, the U.S. government would have to cut an estimated 40 cents out of every dollar it spends, forcing grim choices between defaulting or cutting back programs like those that help the poor, disabled and elderly.

Obama trumpeted that the spending cuts would bring annual domestic government spending to the lower level in 60 years but promised they would not come so "abruptly" as to be a "drag" on the fragile U.S. economy, still struggling with stalled growth and 9.2 percent unemployment in the wake of the 2008 meltdown.

The agreement faced opposition from conservative Republicans close to the "Tea Party" movement, who have called for draconian cuts, and from liberal Democrats who have vowed to protect the US social safety net.

"The 'deal' he announced spends too much and doesn't cut enough," said Republican Representative and presidential candidate Michele Bachmann. "Someone has to say no. I will."

Democratic Representative Raul Grijalva, co-chair of the Congressional Progressive Caucus, rejected the deal in a blistering statement declaring: "This deal is a cure as bad as the disease. I reject it."

Democratic House Minority Leader Nancy Pelosi had said earlier that she needed to present the framework to her rank-and-file and declined to endorse it.

The framework would initially raise the debt ceiling by about $900 billion, and tie a further $1.5 trillion increase to a special new US Congress committee charged with finding an equivalent amount of deficit-reduction over 10 years.

The panel would have 12 members, evenly divided between Republicans and Democrats, and would be tasked with reporting back by late November in order to hold votes by late December on its proposals.

A committee deadlock would trigger automatic spending cuts designed to be "unacceptable" to both Democrats and Republicans.