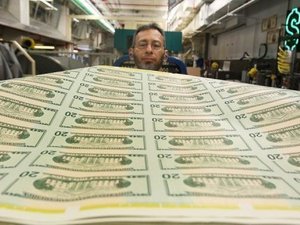 The dollar climbed against the yen in Asia on Monday, after U.S. President Barack Obama announced an 11th-hour agreement to raise the U.S. debt limit to avoid default that is pending approval by Congress.

Obama announced late Sunday that he and top lawmakers had reached a tentative 11th-hour deal to avert a disastrous debt default that would have had a chaotic impact on the world economy.

"I want to announce that the leaders of both parties in both chambers have reached an agreement that will reduce the deficit and avoid default, a default that would have had a devastating effect on our economy," Obama said in hastily announced remarks at the White House.

If approved, the deal will raise the debt ceiling by at least $2.1 trillion -- enough to reach 2013 -- and entail cuts of $2.5 trillion dollars in two rounds, an official said Sunday.

In the U.S. Congress, leaders of the Democratic-held Senate and the Republican-led House of Representatives said they would present the framework to their rank-and-file on Monday ahead of final votes to approve the deal.

The dollar spiked against safe havens on news that lawmakers had moved closer to a deal, Greg Gibbs, head of currency strategy at RBS, told Dow Jones Newswires.

"The news increased investors' risk appetite as default would now be avoided," prompting dollar buying against safe haven currencies such as the yen and the Swiss franc, said Teppei Ino, analyst at Bank of Tokyo-Mitsubishi UFJ.

"But after briefly topping 78 yen, the dollar's topside was capped as the market still needs to confirm the vote with some Republican lawmakers said to be firmly against the deal," Ino said.

Gibbs noted the key now is how ratings agencies respond to the plan.

"There is a lot of work for them to do before they convince the market that they have the wherewithal to get their fiscal house in order," Gibbs said.

On Friday Moody's said: "If there were a default on a Treasury debt obligation, a downgrade would likely follow, even if the default were swiftly cured and investors suffered no permanent losses."

The dollar was mostly lower against other Asian currencies.