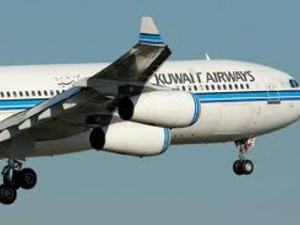 Kuwait on Monday invited bids from local and international investors to buy a stake in Kuwait Airways as part of a privatization process to turn the loss-making airline into profit.

The privatization committee of Kuwait Airways said in a statement that interested parties should submit their "expression of interest" to participate in the bidding for 35 percent of the airline.

The process, open to companies listed on the Kuwait Stock Exchange and specialized international companies, closes on August 25. Local airline operators are banned from taking part.

The privatization committee has been formed to transform the state-owned Kuwait Airways Corp. into a private company and to transfer assets, liabilities, rights and benefits from KAC in accordance with a law passed in January 2008.

International firms have valued the assets of Kuwait Airways at 220 million dinars ($800 million).

The airline's privatization law stipulates the sale of 35 percent of the private company to a strategic investor and 40 percent to be sold to Kuwaiti citizens in an initial public offering.

Kuwait Airways has posted a loss in all but one of the past 21 years, accumulating losses of more than $2.7 billion.

The airline has an ageing fleet of 15 Airbus and two Boeing aircraft.