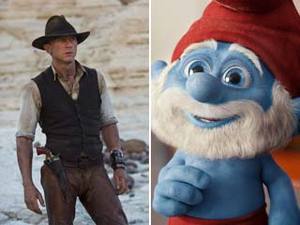 "Cowboys," with reported production costs of around $163 million and starring Hollywood A-listers Harrison Ford and Daniel Craig as cowboys warding off an alien invasion in the 19th century Old West, pocketed $36.2 million for its opening weekend, according to industry tracker Exhibitor Relations.

Those figures were on par with ticket receipts from the small blue Smurf creatures first created by a Belgian cartoonist more than 50 years ago, likely riding on a wave of family appeal. Some theaters offered the film in 3D.

In third spot, "Captain America: The First Avenger," featuring the beloved comic book hero, took in $24.9 million during its second week of showing, ahead of "Harry Potter and the Deathly Hollows -- Part 2."

During its third week in theaters, the eighth and final episode scored $21.9 million, for a total of $318.5 since its smash release in early July.

In the latest of its record-breaking run, Warner Bros. Pictures said "Deathly Hallows" had crossed the $1 billion threshold in worldwide ticket receipts, the first in the series and only the ninth film in cinematic history to do so.

The company said the film had earned about $690 million outside North America, for a total of $1.008 billion, making it the top-grossing film in Warner Bros. Pictures' history.

Other records for the film include one for single-day ticket sales ($92.1 million) and another for midnight premiere sales ($43.5 million).

"What's truly astounding is that these kinds of numbers are being achieved so early in the film's release," said Warner Bros. Pictures president of domestic distribution Dan Fellman.

Adult romantic comedy "Crazy, Stupid, Love" raked in $19.3 million. A middle-aged father played by Steve Carell learns how to get women as he deals with the adulterous tendencies of his wife (Julianne Moore) for this new release.

Sixth place went to "Friends with Benefits," a romantic comedy starring Justin Timberlake and Mila Kunis. It sold $9.3 million in tickets during its second weekend in theaters.