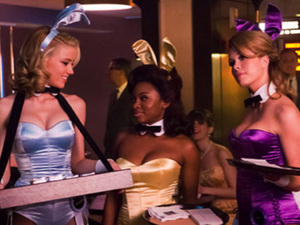 The legendary Playboy bunny costume can be pretty snug, but it puts a wearer in the mood.

The actresses who star as those alluring waitresses in NBC's "The Playboy Club" say dressing for the role made it easier to play.

Amber Heard plays Bunny Maureen in the upcoming series and says that when the suit goes on, "you are instantly transported back to that time." The show is set in 1961.

During a meeting with reporters Monday, co-star Jenna Dewan Tatum agreed that it's like "playing dress-up every day."

Executive producer Chad Hodge confirmed the costumes are faithful re-creations of the circa-1960s originals, but they have " a couple of invisible modifications" to provide a bit more comfort than before. He didn't get specific.