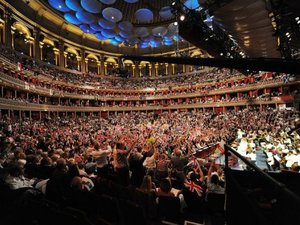 Harrods Estates described the box, which it is claimed contains the best seats in the concert hall, as the "ultimate gift" for a loved one.

Although the same money would buy a two-bedroomed flat in the exclusive Chelsea district not far away, the 865-year lease should give the owner and their descendants enough time to make it worthwhile.

The box is the only one left in the hall still featuring its original timber veneer and mirrored panels, while its location on the second tier on the eastern side of the auditorium offers spectacular views of the main stage.

Shirley Humphrey, sales and marketing director at Harrods Estate, said: "The boxes at the Royal Albert Hall are extremely rare and those with original features are even rarer, so we anticipate receiving a high level of interest.

"This five-seat box is perfect for entertaining, whether it is business or pleasure."

The Royal Albert Hall was part of a plan envisaged by Queen Victoria's consort Prince Albert to create an estate to promote the understanding and appreciation of the arts and sciences in the South Kensington area of London.

When he died in 1861, the plans went ahead and the hall was opened in March 1871. Since then it has become one of Britain's top music venues, hosting everything from the series of classical concerts known as the Proms to gigs by Jay Z.

To raise funds for the completion of the building, private individuals were invited to buy 999-year leases on some of the seats, for £100 each. Queen Victoria bought 20, and the current monarch still has a box there.

If the five-seat box on sale is a little too expensive, a block of five stall seats is also available through Harrods Estates, costing a cool £375,000.