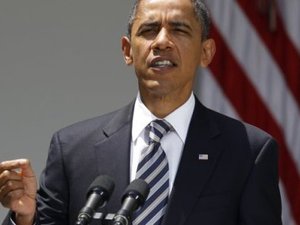 The U.S. Senate on Tuesday approved legislation to avert a disastrous debt default and cut trillions in government spending, sending the contentious bill to President Barack Obama to sign into law.

Lawmakers voted 74-26 to pass the measure -- which cleared the House of Representatives by an overwhelming 269-161 margin a day earlier -- with just hours to spare before a midnight (0400 Wednesday) deadline.

Twenty-eight of Obama's Republican foes joined forty-five Democrats and one independent who usually sides with them in favor of the legislation, while 19 Republicans, six Democrats, and the chamber's other independent voted no.

Obama was expected to sign the measure quickly and turn his focus to tackling historically high U.S. unemployment of 9.2 percent and boosting the sagging U.S. economy, likely the dominant factor in his November 2012 reelection bid.

"We have to get this out of the way to get to the issue of growing the economy," Vice President Joe Biden declared Monday, vowing that once the bill is law "we will be talking about nothing come then but about jobs."

The legislation lifts cash-strapped Washington's $14.3 trillion debt limit by up to $2.4 trillion while cutting at least $2.1 trillion in government spending over 10 years.

Republicans have promised the spending cuts will create jobs, but top Wall Street economists have warned the austerity measures will actually be a drag on already sluggish U.S. growth even as government stimulus measures run out.

The overall shift from priming the U.S. economy to government belt-tightening is expected to reduce U.S. growth next year by about 1.5 percentage points, according to JPMorgan Chase economists.

Democrats, especially on the party's left flank, have expressed outrage that the bargain Obama struck with his Republican foes omitted any increase in tax revenues from the richest Americans or wealthy corporations.

^^^how immature r u to create a copy account? Grow up and learn to talk politics like an adult not a spoiled brst