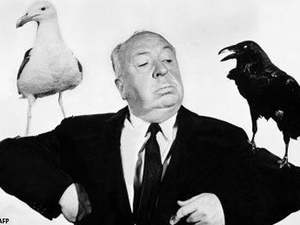 One of the earliest films made by British master director Alfred Hitchcock has been found in New Zealand, researchers said Wednesday.

The New Zealand Film Archive said the first three reels of the six-reel feature "The White Shadow" were found in a cache of ageing nitrate prints given to the archive in the 1990s.

It said the silent-era film, made in 1923, was believed to be the oldest surviving feature by Hitchcock, who went on to conquer Hollywood with classic thrillers such as "Psycho", "Vertigo" and "North by Northwest".

The archive described the film as "a wild atmospheric melodrama" about two sisters, one angelic and the other without a soul. No other copies are believed to exist.

"This is one of the most significant developments in memory for scholars, critics, and admirers of Hitchcock’s extraordinary body of work," David Sterritt, chairman of the U.S. National Society of Film Critics, said.

Sterritt said Hitchcock, who died in 1980, wrote the film’s scenario, designed its sets, edited the footage, and was assistant to the British film director Graham Cutts, who bristled with professional jealousy toward the gifted upstart.

"These first three reels of 'The White Shadow' -- more than half the film -- offer a priceless opportunity to study his visual and narrative ideas when they were first taking shape," Sterritt said.

The reels were among a treasure trove of silent films given to the film archive in 1993 after the death of former projectionist Jack Murtagh, who worked at a cinema in the town of Hastings in the first half of the 20th Century.

At the time, cinemas were supposed to destroy film prints at the end of their distribution run but Murtagh instead hoarded them in his garden shed, preserving many works that would otherwise have been lost to history.

The archive is methodically working to preserve Murtagh's collection of delicate nitrate prints, which in 2009 also yielded the only known copy of US director John Ford's comedy "Upstream".

The films were not seen as valuable in Murtagh's day and his grandson Tony Osborne said many viewed his collection as eccentric.

"He would be quietly amused by all the attention now generated by these important film discoveries," Osborne said.

The Hitchcock feature will be preserved at Wellington's Park Road studio, which has also done post production work on modern movies, such as New Zealand director Peter Jackson's "Lord of the Rings" trilogy.

The whereabouts of the final three reels of the film remain a mystery.