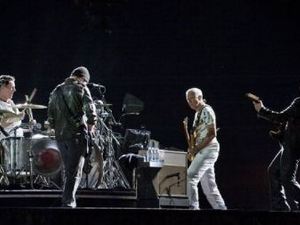 Irish rock band U2 has closed out what was described as "the most successful concert tour of all time" over five continents and two years, according to concert promoter Live Nation.

Liz Morentin, a Live Nation spokeswoman, told Agence France Presse Tuesday the final numbers are not yet in from the U2 "360 degree Tour" but said "it surpassed $700 million, beating the Rolling Stones record" from a 2005-2007 tour.

Billboard magazine said the tour hauled in some $736 million, topping the $558 million established by Mick Jagger's Stones, and also breaking the record for tour attendance.

The tour began June 30 in Barcelona, days after the death of Michael Jackson, and included 110 events, ending July 30 in Moncton, Canada.

During the tour, U2 performed in the Balkans for the first time since 1997 and played three home town concerts at Dublin’s Croke Park, before heading to California to perform in front of 97,000 fans at the Rose Bowl.

A second European leg started in August 2010, featuring U2's first appearances in Russia and Turkey and was followed by events in Australia and New Zealand.

In 2011, U2 played to South Africa for the first time since 1998 with two huge concerts in the World Cup Stadiums of Cape Town and Johannesburg.

The group had three sold-out nights at Estadio Morumbi in Sao Paulo, Brazil and had its biggest single audience of 108,800 at Stadium Azteca in Mexico City on May 14, 2011.

Arthur Fogel, Live Nation's chairman of global music, said: "This tour was a brilliant success on every level and all involved should be extremely proud. U2 once again have set the standard for achievement -- perhaps for all time."

Some of the dates had to be rescheduled after front man Bono had emergency back surgery for temporary "paralysis."

Bono injured himself during tour preparation training in Germany and was treated for severe compression of the sciatic nerve, a serious tear in the ligament and a herniated disc, doctors said.

It was a great concert. I was able to attend it in Istanbul. I'm happy to say that I was part of this.