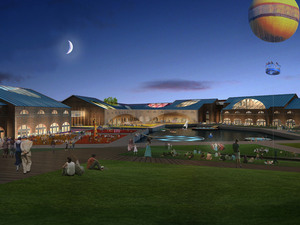 A New York-based architectural firm was on Tuesday awarded a prestigious contract from billionaire Roman Abramovich to design an island in Russia's imperial capital Saint Petersburg.

The WORKac firm was announced the winner in a private tender organized by the Millhouse investment firm of the billionaire businessman that oversees the design of the New Holland project.

The 7.6-hectare (18.7-acre) New Holland Island comprises prime land in the heart of Saint Petersburg and is only a short stroll from the famed Mariinsky opera and ballet theater and the Neva River.

The island is cut off by the city's rivers and canals. The disused site currently houses warehouses largely built by the navy in the 18th century.

It gave no time frame of when the project may be completed or the costs involved.

The Russian media spotted Abramovich and his partner Daria Zhukova on the island last month amid speculation that the couple planned to turn the site into Russia's next chic celebrity nightspot.

Zhukova owns a gallery in Moscow and is one of the country's most closely-watched trendsetters.

WORKac has been involved in various projects around New York City and in 2009 was honored at the White House as Finalist for a National Design Award.

New Holland was to have been rebuilt by British architect Sir Norman Foster in 2006 but his vision of a touristic and cultural complex was thwarted when the first consortium that won the tender went bankrupt.

The island was created in the 18th century through the construction of two canals and gains it name from its resemblance to areas in the similarly canal-filled Netherlands city of Amsterdam.