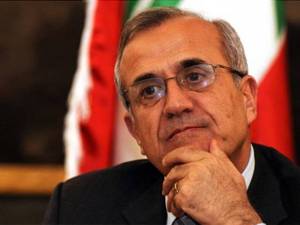 President Michel Suleiman moved to his summer residence in Beiteddine for three weeks, while his consultations with top officials over the dialogue are ongoing, including talks with Marada leader MP Suleiman Franjieh, al-Liwaa newspaper reported on Thursday.

Wissam Baroudi, the president’s son-in-law, told the pan-Arab daily Asharq al-Awsat that the president used his constitutional right concerning the formation of the cabinet.

“No one can blame him or take away the right granted to him by the constitution,” he said.

Baroudi, who intends to run for the 2013 parliamentary elections in Keserouan, confirmed that the president “chose the ministers that represent him based on consensus.”

However, he denied that Suleiman demanded a share for himself.

“He was keen on forming a bloc that safeguards the cabinet and the country.”

Asked about the national dialogue, Baroudi expressed his belief that the March 14-led opposition “didn’t read into the president’s statement and hasted in placing conditions.”

He told the newspaper that “the president realizes that the previous dialogue committee doesn’t work today… He’s looking for the best foundation for the dialogue and the basis it should start from.”

Concerning the Special Tribunal for Lebanon probing the assassination of ex-Premier Rafik Hariri, the newspaper quoted Baroudi as saying: “Suleiman will not agree on disavowing from the cabinet’s international commitments.”

However, he told the daily that the president has a personal conviction that “Hizbullah’s concerns and doubts regarding the STL cannot be over passed.”

fakhamto, what will u do when mikati resigns, and jumblat jump back??

With all due respect Mr the president this message is not intending to offend your respectable status, but your mandate started with the notion of Dialogue, and was resumed with the 7th of May dialogue and then the government take over dialogue and all those dialogues are designed only to hear what the party of God has to say. Well with all the respect i can afford this dialogue is not working; it started in the purpose of disarming hezbollah in a respectful manner and it ended to stating that the "army of lebanon is not fit to keeping lebanon at ease" as Mr Aoun said. Mr the president the resistance is a must but one can't neglect the edge it is giving to one sect over all the others. Let this be considered as a national message, we need military service for the resistance, we need to impose fees to finance the resistance, we need honest elections with lebanese foreigners votes and then we need to put it under the control of the parliament where the will of the people is presumed to