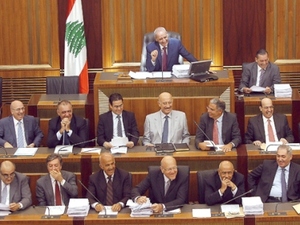 Parliament approved on Thursday a draft law on the delineation of Lebanon’s maritime border after introducing an amendment to article 6, two days after the cabinet’s adoption of the decree.

The adoption of the law comes amid a dispute between Lebanon and Israel over their maritime boundary. Both countries are moving to assert sovereignty over an area potentially rich in gas.

Tension rose last month after Israel's cabinet approved a map of the country's proposed maritime borders with Lebanon and submitted it to the United Nations, which has been asked to mediate.

The map conflicts with one submitted by Lebanon to the U.N. last year and that gives Israel less territory. Lebanon says its map is in line with an armistice accord drawn up in 1949 and not contested by Israel.

The decree sets out the country's Exclusive Economic Zone (EEZ) which is a sea zone that gives a state the right to explore its maritime resources.

The parliamentary approval came on the second day of a session that also witnessed the adoption of 25 draft laws.

@shab:
we'll need these resources (money) to fix this country ;)

Action not words will determine if this governement is working hard enough or not. Go get us that oil and pay back Lebanon's debt, and of course try to use that oil as well to help facilitate people's daily life needs, like electricity, water

Though the border demarcation law is very important, the Governmnet should now accelerate the completion of exploration and survey work, and start drilling in the undisputed areas as quickly as possible. Don't wait until the disputed border issue is resolved - that's not going to happen anytime soon.

Benefiting from oil & gas resources should be top priority for the Government. Shoring up the country finances is a pre-requisite to "fixing the country". It's not really a fix if the Government has to go deeper in debt. I hope the Government learns something from the soverign debt crisis in Eurpe and the US.

Strategically, the Governmnet should be using this as an opportunity to build close ties with China, the only real superpower left. China is looking to secure resources so work with Chinese oil & gas companies and get a security agreement China to help protect the country's economic interests!

Great we have the right, but where r the resorces to do so? Oh yeah, from iran so that they have a back up when their oil runs dry in 15 years.

What about the underground gas supplies manufactured daily by hassan add fassoulia, any plans on how to exploit those?.

With Nasrallah constantly threatening bombardment no oil and gas company in the world is foolish enough to even think of taking up any explorations.

Except an iranian oil and gas company bubba! Bringing to light at this moment the need to exploit our gas and oil resources, i most probably political not economical. One can imagine if Iranian workers are drilling and operating the pumping station how fertile this area will be with tension.Another Shebaa card to play at will ! Maybe this is why they have just appoited a Pasdarani as oil minister in Iran !!

Leb4all how'd I contradict myself on this