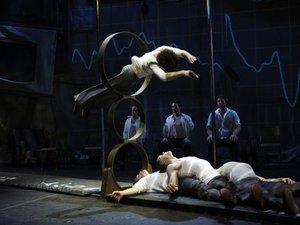 Doing skateboard tricks on a theater stage is usually deeply frowned upon. But at the Union Square Theatre these days, they're not only encouraged — they're a big part of the show.

During a recent rehearsal of the touring show "Traces," the seven ensemble members practiced flips, jumps and dance moves on and off their boards as they fine-tuned a section of their 90-minute, cardio-intensive circus.

The show rolls into New York for a 10-week stand that combines traditional acrobatic acts — juggling, teeterboard, hoop jumping and spinning inside an oversized wheel — with street elements such as skateboarding and basketball.

Billed as a stripped-down alternative to Cirque du Soleil, there are no costumes or makeup or elaborate sets. The cast — six men and one woman — interact with the audience when they're not doing things that make your head hurt just watching.

Snider, one of the seven founding members of the Montreal-based collective known as 7 Fingers that created "Traces," acts as a gentle taskmaster on this day as opening night approaches, using both English and French to motivate her international cast.

"Run, run, run, people! This has got to be fast," she says at one point, somewhat annoyed. Another time she is more motherly and encouraging: "Places, people. And music. Cinq, six, sept, huit..."

The skateboard scene is designed to be a light moment between some of the more grueling acts. In it, the cast jumps over each other and screeches across the stage with daredevil precision, but they also stop to dance with their boards as if in a Busby Berkeley musical as the song "It's Only a Paper Moon" plays. The show also includes music from Radiohead, Blackalicious and John Zorn.

The performers — two Americans, one Chinese, one Swiss and three Canadians — range in size from the biggest, Mason Ames, who stands at 6 feet and 2 inches and weighs 228 pounds, to Valerie Benoit-Charbonneau, who is 5 feet and 2 inches and 112 pounds, but they're all made from solid muscle. That's important since they never leave the stage and keep doing crazy stunts for an hour and a half. The show has no understudies.

"The main thing is to try to stay injury-free the whole time. If you have a little sprained ankle and have to do the show every night, it's like super annoying," says Bradley Henderson, 27, who hails from San Francisco.

Snider and her six collaborators — all ex-Cirque du Soleil members — founded 7 Fingers in 2002 and have created shows including "Loft," ''La Vie," ''Psy" and "Patinoire." The show "Traces" has existed in one form or another for five years — it was last in New York in 2008 with only five performers — and nicely encapsulates the troupe's mission statement of "circus on a human scale."

During the show, the performers — all dressed in workout wear or street clothes — alternate from executing leaps and spins with playing a piano (all had to learn the instrument) or sketching on an overhead projector. At points, the show is like a confessional as the performers step forward to tell the audience who they are.

"They really wanted to put the emphasis on the artists. They don't want to put us in crazy costumes or makeup. They just want you to be you on stage," says Benoit-Charbonneau, 22, who attended circus school in Montreal for seven years. "That's the beauty of it."

The company has found an ideal home in the 499-seat Union Square Theatre on 17th Street, close to another very kinetic, acrobatic show — De La Guarda's "Fuerza Bruta: Look Up." Together, the two feed off the neighborhood's mix of hipster, grunge and skate-punk energy.

"I was walking around New York and just the energy of this city goes together with this show," says Benoit-Charbonneau, a Canadian who during the show often flies through the air like a rag doll.

Unlike other circus shows that detest mistakes, 7 Fingers doesn't get too upset if a trick fails. In fact, Snider thinks an audience gets more of an intimate thrill if an acrobat they are getting to know fails and then tries again.

"There's no sense of embarrassment. They could fall flat on their face and it would be part of the show," she says. "What these kids do is 10 times as exciting than if it were some perfectly choreographed, spectacular, wow-I-could-never-do-that show."

"Traces" got a boost last month when the seven performers did a medley of four acts on an episode of "America's Got Talent," spiking Google searches for the show and impressing many bloggers. "Canada's got talent, too, it seems," wrote one.