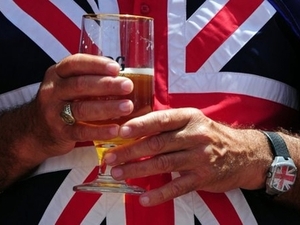 Drinkers are celebrating a much-loved part of Britain's heritage this week at the national beer festival, despite pubs closing at the rate of 25 a week and prices at the bar surging.

The Great British Beer Festival temporarily transforms the Earls Court exhibition center in west London into the biggest pub in the world, serving an expected 65,000 punters over five days until Saturday.

The event, staged by CAMRA, the Campaign for Real Ale, raises a glass to beer brewed using traditional ingredients and left to mature in the cask from which it is served rather than industrial-scale, pasteurized lager fizzed up with a blast of carbon dioxide gas.

However, despite the revelry in the cavernous hall, many feel the traditional pint in a pub is under threat at a time when the British economy is seeing sluggish growth.

Alcohol duty rates increased by two percent above the Retail Price Index in March, adding another four pence to the price of a pint of beer.

The consumer organization says beer tax has gone up by 35 percent in the last three years, with Britons now paying eight times more tax than in France and 11 times more than in Germany.

"This year we've had a double whammy," said CAMRA chief executive Mike Benner, referring to the value added tax rise from 17.5 percent to 20 percent on top of a seven percent increase in excise duty.

"A third of the price of a pint these days is tax. The government needs to recognize that if they're going to encourage people back into pubs and drinking socially in a regulated environment, they do need to deal with this."

Benner told Agence France Presse that around 25 pubs were closing every week as supermarkets undercut them and consumers increasingly chose to drink at home.

"The price gap between supermarket prices and pub prices is widening. Now it's quite often seven to one. It's a compelling argument to drink at home," he said.

On the festival floor, long-haired, grey-bearded beer fest regulars mingled at the bars with hen parties, sampling the myriad of flavors.

One man wore a suit made out of beer bar towels, while a parade of drummers from Cornwall thundered through the hall and punters tried out traditional pub games like skittles and shove ha'penny.

To soak up some of the booze, time-honored pub foods such as crisps, pork scratchings and pork pies were on hand.

Peter Hynes, 53, from Huddersfield in northern England, explained the "tactical drinking" required to get through a beer festival.

"The tactic also is to drink in third pints. You can try three different drinks but only have one pint."

Besides the British beers, other countries including Japan, Australia, Singapore, Chile and Norway are represented.

A tasting panel gave the champion beer of Britain award to Oscar Wilde, a mild ale from the small Mighty Oak brewery in Maldon, northeast of London.

"We have a philosophy that we use only the best ingredients money can buy," said Mighty Oak managing director and founder John Boyce.