Report: March 14 to Hold Anniversary of ‘Day of Repression’ on August 7 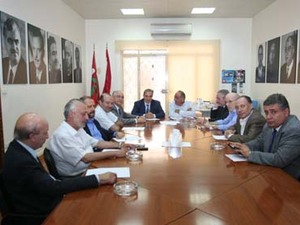 The general-secretariat of the March 14 forces is expected to hold several events on Sunday on the anniversary of the clampdown by the Emile Lahoud regime on opposition activists in 2001, An Nahar daily reported Friday.

The newspaper said March 14 has decided to hold the “Day of Repression” events on August 7, the anniversary of the “attack of the security regime” of Lahoud on people demanding more freedom.

The general-secretariat’s move comes amid a rise in violation of freedoms in the country, an opposition source told An Nahar.

In the events of August 7, 2001, activists were attacked, beaten and arrested by intelligence services at a time when Lebanon was still under Syrian hegemony.

August 7 2001, when Rafic Hariri was Prime Minister and most of "March 14" because of their subservience to Syria's Ghazii Kanaan and Abdel Hallim Khadam.

How pathetic. August 2001,was Mostly fpm activists and some kataeb. The kataeb is no longer represented in the m14 general secretary. Who will be represented that took part in the protests and were arrested? Maybe the ones who did the arresting? Elias murr? Hey fares? After the batrack mass at jamhour, and the chants, of Syria out, there were the protest in front of the justice ministry were Elias murr as interior minister sent in the thugs. As bob says, Rafic hariri was pm at the time. These leftovers of m14 are pathetic thieves who even stoop so low to try and steal history!

Bashar send your boys to welcome them like they did in Hamra . Or Hezb will take care of them like he did on May 7 ....