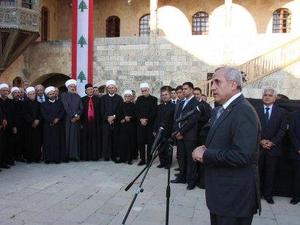 President Michel Suleiman has warned that the democratic changes in the Middle East should lead to improvement of Lebanon’s democratic performance.

During a meeting with a huge delegation from the Shouf area at his summer residence in Beiteddine, Suleiman said: “The security stability is one of the blessings of the democracy in Lebanon where Christians and Muslims live in a single democratic system and where all take part in political life.”

“The Arab world is going through a historic period which is the transformation to democracy. This transformation will be in Lebanon’s favor,” he said.

Suleiman told his guests that the cabinet has made a lot of reforms but “has much more work to do at the level of the adoption of laws.”

“The journey towards the exploration of oil and gas has started,” the president said on the same day parliament approved a draft law on the delineation of Lebanon’s maritime borders.

Yes, we should improve democratic performance, no question about that.... What about the singer who was arrested a week or so ago for performing a song that criticized the President? What about the demonstrators who were beaten up in front of the security forces in Hamra by the Baath and SSNP thugs? Yeah.... we have a long way to go in order to claim we have a civilized society and an able and just government.

It's rather sad that this man has no power anymore. Anybody else feels his words Re worthless?