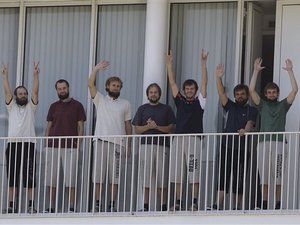 Estonia has paid a 5 million dollar ransom to win the release of the seven Estonian tourists kidnapped in the Bekaa valley in March, the French publication Intelligence Online has reported.

Citing a source close to Lebanese intelligence, the publication said that the Estonians had been kidnapped by mistake, and that the real goal of the hostage-takers was to nab citizens of a Western country with large interests in the Middle East.

The kidnappers' original intent was to put pressure on Syria, but when they realized their mistake, they decided to switch their tactics to ransom, the source said.

The Estonians were freed on July 14, almost four months since armed men abducted them as they entered the country on a bicycle tour from Syria.

The seven, all men in their 30s and 40s, appeared on the balcony of the French embassy in Beirut, where they smiled and waved at journalists gathered outside before joining hands and taking a bow.

Sources had said that they were released in the Bekaa town of al-Taybi in an operation arranged by French intelligence services.

Are there still stupid people out there claiming thses naive ecotourists were spies? What's more interesting though is that some parties well entrenched in the area, may have found this to be a more lucrative business than drug dealings! No wonder charbel Nahas withheld from the ISF the cell phone information his department has captured, when the kidnappers were phoning each other somewhere in the bekaa valley!

It all went wrong for the Syrians and their cronies in Lebanon. They initially thought they were French tourists hoping they can put pressure on France not to pursue its support for the uprising...... Thugs.... protected by thugs....... and work for filth.

The kidnappers, the kidnappers... Do not tell me that the report of the French Intelligence does not mention who they were...
Another eluded fact, Naharnet... It becomes a bit too often these days.

I would like to know the identity of those WHO pocketed the money...will the Lebanese authorities dare clarifying this?

Akid lah progma. If only our govt had a spine :/

Minister of Tourism statement under the Hizb-Allah puppet government: "Terrorists of the world, come over: you have nothing to lose that Iran or Syria cannot pay you for. In our land controlled by the Resistance against Human decency, you will be able to kidnap Westerners of all nationalities and will never be brought to justice. Under Hizb-Allah's government, you will even get payed for your efforts. Viva le vie Hizb-Allah!'

What a scandal....Once again a great example of a civilized hopeless country......