STL to Unveil New List of Suspects by End of August 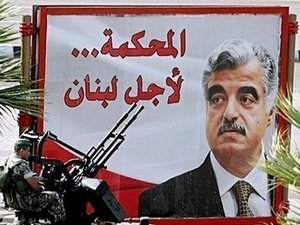 The Special Tribunal for Lebanon probing the assassination of ex-Premier Rafik Hariri will take new procedures before the end of August, al-Liwaa newspaper reported on Friday.

It revealed that General Prosecutor Saeed Mirza contacted several Lebanese officials in the light of the new information.

According to the newspaper, the STL is expected to release a new list of suspects in the assassination.

Al-Liwaa remarked that the new measures will highlight other crimes executed in Lebanon.

It added that there is information that links Hariri’s murder with the assassination of then Industry Minister Pierre Gemayel on November 21, 2006.

We have been waiting for this moment for a long time...... patiently

....... it is getting more interesting! But, of course, Hizb of Iran will maintain that all these people were killed by Israel to discredit the "resistance", as if this arrogant resistance needs more than it has already done with its own hands to discredit itself!

Why do naharnet keep on showing us such an ugly picture when they talk about the STL ? Cant they put something else that doesn't hurt our eyes ! or something more decent than that ugly face ?? Thank you .

Get the popcorn. Show's begining

May GOD bless your soul, Hariri. What a picture! As if he's still among us.

He is with us every time we look at Centre Ville, which he robbed from under the feet of its rightful owners, and we curse the hour he set foot in Lebanon and thank God a million times for ridding us of his filth.

Nobody cares other than the losers who lost pretty much everything, and will lose this one after all the pain. It's like their last lifeline, except that they are terminally ill.

Le Phenicien: yes he is correct it's time to show the turban guy.lol

Justice is coming to Lebanon and soon to Syria.

Every decent Lebanese should demand that their name is on the list of accused because nothing is more honorable than to serve our country by ridding it of the filthiest of the filthy.