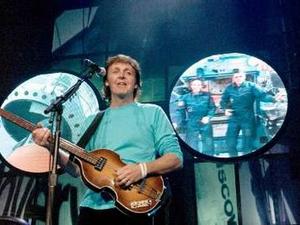 He was on his way back to England after a visit to America, he recalled for reporters on Thursday.

"But out of the window on the right side of the airplane you could see the twin towers," he said. "You could see one plume of smoke. Then you could see two, shortly thereafter. And I said, 'That's just an optical illusion.'"

It wasn't, of course. The plane McCartney was on, like every other, was grounded. And before long, he was trying to think of how to respond to the attacks, and what he could do to help.

The result was a "Concert for New York," which McCartney helped organize. He was joined onstage a few weeks later by David Bowie, Elton John, Billy Joel and many others for the event at Madison Square Garden, which served as a benefit for the city while celebrating its resiliency in a time of crisis.

That concert now serves as the framework for a new film, "The Love We Make." Directed by legendary documentary filmmaker Albert Maysles, it captures McCartney's firsthand observations of 9/11 as well as concert performances and backstage preparations.

It premieres on Showtime on Sept. 10.

The film wasn't finished until recently, said McCartney, though he could offer no good reason why it took a decade to complete.

Speaking by video feed from Cincinnati to reporters at the Television Critics Association gathering in Beverly Hills, he speculated that "the fact of the 10th anniversary spurred me into thinking, 'Wait a minute! Albert took some great footage back then that we never did anything with.'

"So I got in touch with Albert, and asked him, 'Is it still all round? Would it make a good film?' And I said, 'Come on, let's do it, then.' We were reawakened by the 10th anniversary."

McCartney had worked with Albert Maysles and his brother and longtime partner David (who died in 1987) nearly four decades earlier. The brothers, who were pioneers in the cinema verite style of filmmaking all the Beatles admired, had proposed making a documentary about the Fab Four when they first arrived in America in 1964.

McCartney said he and his band mates asked the brothers, "What do you want us to do?"

The Maysles' reply: "We want you to just ignore us."

"We thought that was the best piece of direction we'd ever received," McCartney recalled, and when he hit on the idea of a film centered on the 9/11 concert, he said he asked Albert Maysles, then 74, "Will you just do it all again? I'll ignore you again."

"Albert has this great way of hiding," said McCartney, who spoke with satisfaction of his own lack of guardedness in the presence of Maysles' camera.

"There are backstage moments that are very intimate," he said. "I'm talking to Bill (Clinton) as if he's an old friend, forgetting that he was the president of America. And the guys in the Who — again, it's very intimate."

McCartney recalled that, just after 9/11, "there was fear in the air. I had never experienced that, particularly in New York, and this was where the idea of doing a show came about."

By Oct. 20, when the concert took place, "we were emerging from the fearfulness of the immediate impact," and in the audience "you were seeing the emotion releasing through music. ... We actually felt like we were doing a bit of good."

McCartney said the concert exemplifies his theory that "music can really be healing."

"I've lucked out to be in a profession where I can actually help heal, let people get in touch with their emotions," while, at the same time, he gets in touch with his.

McCartney said he thinks back to the early days of the Beatles, and those memories "are etched in my mind."

But he finds life, and music-making, better than ever at age 69.

"Whereas I would expect to have been jaded by now, it actually seems new every time I do it," he said, just hours before his Cincinnati performance, part of his On the Run tour. "It has become probably more exciting that ever for me."