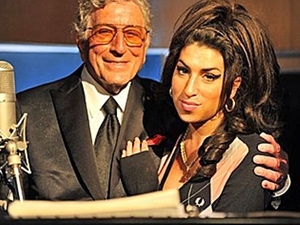 Amy Winehouse's final recording, a duet with Tony Bennett, will be released as a charity single for a foundation set up in her name, her family said Thursday.

"Body and Soul" will go on sale in September, with proceeds going to the newly established Amy Winehouse Foundation.

Winehouse, who had struggled for years with drug and alcohol addiction, was found dead at her London home on July 23, aged 27.

Her father, Mitch Winehouse, said releasing the song for charity was "the most fitting tribute of all" to his daughter. Her voice sounds "as amazing and beautiful as ever" on the recording, he said.

After Winehouse's death Bennett called her "an artist of immense proportions" and said she "gave a soulful and extraordinary performance" when they worked together.

Mitch Winehouse said the foundation would fund a range of charities for young people.

"We intend to raise funds and distribute them to individual projects who apply for help," he said.

"I couldn't be happier that everyone involved with Amy and this recording felt they wanted to contribute."

The family also hopes to establish a drug rehab center for addicted youths.

"Body and Soul" will be released by Columbia Records, a division of Sony Music.