Don't Die for Me, Argentina: Crypt Next to Evita for Sale 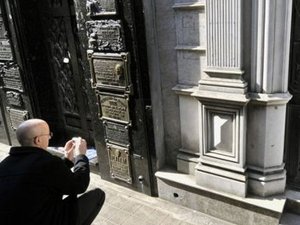 Evita Peron may have died back in 1952, but she remains an icon in her native Argentina -- and now the crypt next to hers at a Buenos Aires cemetery is for sale for a mere $250,000.

The crypt in Buenos Aires's La Recoleta cemetery "is being sold like an apartment, with a deed," the owner, Damian Sabelli, told Agence France Presse.

Indeed, a three-room apartment in an upscale Buenos Aires neighborhood costs about the same price.

The daughter of a poor farmer and one-time actress, Evita -- born Maria Eva Duarte -- was first the lover and then the glamorous wife of Juan Domingo Peron (1895-1974), a military officer who was president three times.

Evita was seen as a saint to Argentina's working class but loathed by the country's elite, who considered her a social climber. She is credited with influencing and supporting her husband's populist policies.

La Recoleta is the final resting place for presidents, celebrities, and wealthy Argentines. Hundreds of tourists visit the cemetery every day, and Evita's tomb is the main attraction.

Sabelli, who inherited the crypt from his mother, said once the sale is complete it will take about two weeks to remove the remains of the 14 people currently held there.

A cemetery guide scoffed at the high price, saying the crypt is worth "no more than $100,000."

Dabelli's asking price may actually be a steal: burial vaults at La Recoleta can go for as much as $500,00, according to cemetery officials.

Evita, who died of cancer at age 33, was buried in La Recoleta in 1976 after her corpse went missing for 16 years.

Her rags-to-riches story became the subject of a musical and films, including a 1996 movie directed by Alan Parker and starring Madonna.

The Andrew Lloyd Webber musical Evita from the 1970s features the iconic song, "Don't Cry for Me, Argentina."