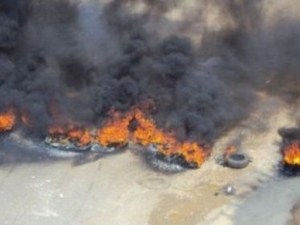 Dozens of relatives of Islamist prisoners detained in Lebanon's notorious main prison of Roumieh on Friday blocked the international highway linking the northern city of Tripoli to neighboring Akkar and the Syrian border, demanding the government to urgently “settle the cases of their detained relatives, who have been in jail for four years without a trial.”

The protesters called for “filling the vacancies in the Judicial Council panel, to which the Fouad Saniora government had referred dozens of cases following the al-Tal and al-Bohsas bomb attacks” against army troops.

They stressed that a lot of detainees “have nothing to do whatsoever with the bomb attacks,” noting that “many of them should not be jailed for more than one or two years, in line with the verdicts issued last year by the Military Court in similar cases.”

Meanwhile, relatives of other prisoners blocked the airport highway with burning tires to protest the parliament’s recent rejection of a bill on lowering prison year to nine months.

Didn't the m8 camp say they were going to make wide prison reforms?? Sounds like another bs lie to undermine the Hariri government

Let the Syrian army take care of these Islamists Salafi terrorists , in case our army doens't do the job . Let them rot in hell all of them near their other brothers of naher el bared .

They should arrest and put in Jail the people blocking and burning tires. You want to protest, protest peacfully.

Does anyone in Lebanon know the environmental impact of burning tires? Regardless who they are. It is bad for every one... You can protest and cut the road without burning tires.......... sad

Hmmm...blocking roads... where have I heard of that before?