Thousands Demonstrate in Tripoli Against Assad, Accuse Lebanese Authorities of Being an Accomplice 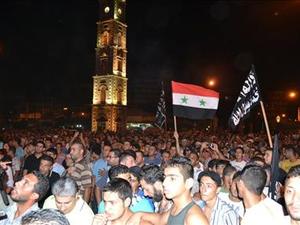 The demonstrators marched at around 11:00 pm in several Tripoli neighborhoods after holding a sit-in at the city’s al-Tall square. They returned to the square and held prayers for the soul of thousands of people killed by the regime in Syria.

The protestors chanted slogans against the Assad regime and in favor of the “oppressed” people of Syria.

During the sit-in, Sheikh Raed Kabbara addressed the crowds criticizing the stance of Lebanese authorities from the deadly assault on Syrian citizens.

Sheikh Raed Hleihel, who is a member of the Ulemas Gathering that organized the march, read a statement saying Syrian authorities were committing “genocide against all opposition activists.”

He accused Lebanese authorities of being an accomplice with the Assad regime.

(Photo courtesy of As Safir newspaper)

What happens in tripoli doesn't saty in tripoli......

Uh oh, things are getting rather tense it seems in Lebanon...

Miqati you failed your own city...

Ithinkthere14iam. You must be so excited that these fanatical extremist are stiring trouble.

Naharnet, Is the photo of Hama or tripoli? the clock in the background?

And the snowball is growing.... We always hated the arab people because for us they were people on camels and against modern civilization but today the arabs are the only genuine civilized people and much more they are true to their ethics, they wouldn't sell their values; When the hall world is selling values because they say "the economic crisis is putting them on the back-foot those starving people in syria, and in lebanon are holding firm to their believes and are setting new standards. A new dawn rises for the middle east. Hassan Nassrallah says he is the only one who has beaten the Israeli monster, but in him i see another monster looming. Looking to those guys in tripoli and in syria, i see seeds of humanity being laid down, i see a hall new generation that cherish human rights and moral values and this brings us hope and enlightenment in our dark and said reality

President Assad , please send your army to send these young manipulated paid boys back to their parents and homes .

Hariri and mustakbal gang will not succeed .

Please save us your silly comments. I would like to see you under the boots of the mokhabarat and the shabiha. You will may be wake up and understand what the syrian people endured during the last 40 years.

So what? They were useless when the Syrian army boots were crushing their heads during their presence in our mountains and prairies. Does anyone think that these useless late bloomers and crazies matter now?

@ado.australia
I am all for the view presented by Moallek, they seem very accurate to me and to the point.

according to ado.australia anyone who protests against an autocratic leader slaughtering his own people is a 'fanatic'.

If so I am a fanatic!

Ado: no, not at all. If u ask me all fanatics, Hezbollah, salafis, etc are the root of the Lebanese problem. U can't have peace with those who do not seek it.