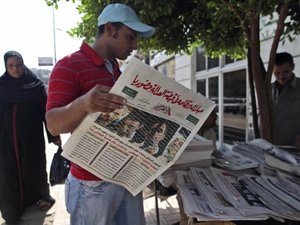 Lebanon’s former envoy to the Arab League Assaad Abi Akl was found stabbed to death at his apartment at the Cairo suburb of al-Omraniyeh, media reports said Saturday.

They said the 70-year-old’s body was found by his nephew in his bedroom. He had received 65 knife wounds.

The nephew who is a dentist residing in Canada, was visiting Cairo along with his wife. They were staying in the apartment. But on the day of the killing, the visitors went for some tourism and when they returned they found the body soaked in blood.

Abi Akl worked in the trade of clothing and lived alone, according to the media reports.

Police launched an investigation which has so far ruled our robbery as a motive for the murder. Investigators said the killer hadn’t taken any private belongings or money from the apartment.

Radical Islam to blame for the brutal killing, why they hate. Lebanese are not Arabs

Allahh yirhamo. Bass how is the above picture related to this article?