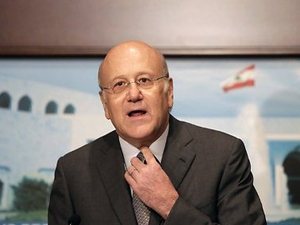 Information Minister Walid al-Daouq accused the March 14 forces without naming them of seeking to confront the cabinet by shoving Lebanon into the events of Syria through the statement issued by Syria’s banned Muslim Brotherhood.

The Muslim Brotherhood on Friday lashed out at Prime Minister Najib Miqati, accusing him of “siding with the killers of Syrian children.”

In a statement published by the Italian news agency AKI, the Brotherhood’s official spokesman Zuheir Salem said: “The Syrian people would never compromise, no matter the sacrifices, the blood of our brothers in Lebanon, whether in Tripoli, Beirut, Sidon … or anywhere in Lebanon.”

“It is known who the political party that wrote and distributed this statement is,” Daouq said. “It wants to shove Lebanon into the events in Syria.”

Another Lebanese official source told As Safir newspaper that the statement of the Brotherhood is “a local invention as part of the campaigns on the government and the prime minister.”

“Lebanon took into consideration its local issues, its ties with Syria and the international community” when it dissociated itself from a U.N. Security Council statement condemning the regime’s crackdown on protestors in Syria, the source said.

“Miqati doesn’t need lessons on patriotism from anyone. He always calls for the adoption of dialogue to resolve all differences and stresses that things could not be solved through violence,” the official added.

It is really funny to hear the March 8 forces say that the 14 march potato coalition is dragging lebanon into the syrian internal swamp. First because March 14 leaders do nothing but talk and they are not capable of anything concrete. On the other hand one has to consider that when the party of god links the surrender of its weapon to the end of the arab conflict and when it gets tons of weaponry from Bashar's closet than i'd have much more reasons to think that not only the March 8 people are the one that are dragging us into the syrian swamp but they are ALREADY in that swamp. So March 8 people you have to realize that you won't be facing that potato March 14 coalition forever. There other people in lebanon that would put in much more, There are people that do not have a shameful past, and there are people who want to hear about total state sovereignty en route to investigate what really happened in solidere, the so called maritime properties, and the south for construction money

Those who have shoved Lebanon in Syria' s affairs are the Hezb who is actively participating, and advising on the quelling of this uprising! The persistant reports of such assistance are not dying out, and could be well understood at least from a political survival standpoint! What' s interesting, is that they portray a totally different relationshing between the Hizb the Farsis and the Syrians. It hasn' t perspired much in the past, at least in the media (the field politicians know it all probably already!), that these guys are all buddies, and that their relationship is not restricted at all to the official images we see sporadically oin the press from time to time. They are buddies with close relationships, a common purpose, but also a strong financial and operatinal underlay, whereby the Hizb is sructurally part of the poitical and military desicion making structure in Tehran, with clear reporting and communication lines etc... Same goes between the Syrians and the Iranians ,

The so called Syrian Brotherhood statement , was issued from Beirut and not from Syria ! and was issued , prepared and financed by the fanatic and Wahhaby al mustakbal , that is their ally and representative in Lebanon to these criminals and Salafis terrorists .

Naharnet , why dont you comment on the ship that was caught yesterday by the Lebanese army at the Solidere Marina , alias Saint Georges Marina , that was full and loaded with sophisticated arms and ready to sail to Syria ? The persons that were on it are arrested and have admitted having done previously many similar trips for al mustakbal ..

Add to that that Syria has been meddling in our internal affairs, and has been doing so for decades, through different surrogates over time. It would have been only appropriate to return the favor for once, and to savour the downfall of those murderous creeps, in the dustbin of history...

Although in this particular instance, there is some parity in the decision making process and coordination. It is increasingly clear that those three players (or should I say 2,5 because the Hezb and the Iranians are almost like one same entity on many issues) just one single party acting on very close coordination on many issues, on a continuous basis, possibly daily basis, The recent issue of Oil and GAs exploitation in Lebanon is probably the political reward of the Hezb to the Frasis, the planning execution and serial killing of the lebanese politicians another one (we will soon get confirmation of that from the STL I think)..So no one should raise eyebrows at reports indicating a direct involvment of the Hezb in Syria. The coordination is there, probably in all fields, on a daily basis, as part of the same corporation!

So The Doctors Fares Soaid, Samir Geagea, Amin Gemayel, Mustafa Alloush, Ammar Houry and all of the remaining doctors did not take the statement by the SYRIAN Muslim Brotherhood against ebn baladon as meddling in the internal affairs of a neighboring country, huh! No wonder these The Doctors are so very much liked and trustworthy! When is their new slogan coming out? can't wait!

Why is it scum because it is defending Syrians? These people live and die for their country my hat goes off to them

The nature of the conflict in Syria and the proximity of Lebanon to Syria means that Lebanon will necessarily be impacted. If the Lebanese government does nothing, that is, in and of itself, a statement of support for the Assad Regime. The action taken at the UN this past week, however was over the top and more than passive. The whole world has condemned Syria for using its airforce to strafe unarmed protesters. This is beyond the pale and beyond civilized conduct. Lebanon, which is a signatory to the Universal Declaration of Human Rights, and the Declaration is incorporated into the Lebanese Constitution, so it has every right to condemn the violation of the Declaration.
Should Assad survive, does Lebanon really want such a monstrous regime right next door? Who would want to live next to a serial killer. Oh, I forgot, we have his dirty uncle living in our celler.