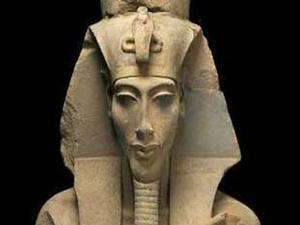 A colossal, 4,000-year-old statue of a seated Egyptian pharaoh will be visiting The Metropolitan Museum of Art in New York City for the next ten years.

The Met announced Friday that the sculpture is going on loan from a Berlin museum that is renovating a courtyard where the piece was most recently displayed.

The 10-foot (3.05-meter)-tall, 9-ton sculpture was carved from a single block of stone and erected in a temple near present-day Cairo.

It is believed to depict the third king of the 12th dynasty pharaoh. He sits on a throne, wearing a kilt and a royal head cloth; a cobra on his forehead symbolizes his authority.

The sculpture will initially sit in the Met's Great Hall beginning this month.

It has been in the German museum's collection since 1837.