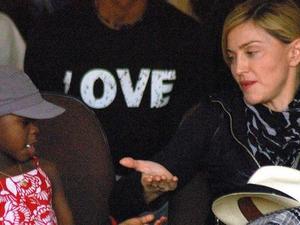 The abandoned site looks more like a quarried mine than a pop superstar's multi-million-dollar dream to groom girls into Malawi's next leaders and doctors.

But the bleak, levelled terraces of gravelly sand near Malawi's capital are the only evidence of Madonna's $15 million (10.6 million euros) academy that was ditched in a cloud over misused funds and disgruntled locals.

The bulldozers are long silent where Madonna -- who adopted two children from Malawi -- laid a foundation stone engraved "dare to dream" in April 2010, in a simple village in a desperately poor African country that many could not find on a map.

A year later the school had been called off. The star is being sued by employees who were fired, her charity is tied up in a U.S. tax investigation, and Malawi is investigating how the land was paid for.

"Initially although I welcomed (it), personally I was very sceptical about the whole thing," said Lilongwe district commissioner Paul Kalilombe.

"There was just too much publicity before there was any work on the ground."

Madonna's charities did not reply to queries. In January, she said the academy project was off in favour of helping existing schools across the country.

But The New York Times then reported on an audit, ordered by Madonna, that found $3.8 million squandered on the discarded academy.

The audit reportedly found a "startling lack of accountability" on the management team in Malawi and the United States.

The star's last word was in April when she said a new strategy would be announced in coming weeks.

Unhappiness here began with payments to villagers for the land, which Madonna's charity Raising Malawi paid through the government.

"It would appear that maybe there were some ghost villagers. Within the list of recipients there are some people who were inserted maybe by some officers who are involved in the practice," Kalilombe told Agence France Presse.

"But it is a matter that is being investigated by the fiscal police in Malawi."

But in Chinkhota, an explanation had yet to reach villagers, who have to swallow a doubly bitter pill with their former fields ruined and not a classroom in sight.

"People were just surprised that there is no activity and wondering what is happening," said Tsiyent Foroyati, 52, sitting in the dirt-yard of her homestead.

Foroyati had never heard of Madonna until she adopted two Malawian children. As the biggest landowner around the school's site, she was paid 39,000 kwacha ($258) in compensation but had wanted three million kwacha.

The family now pays 5,000 kwacha to rent one acre for farming.

"Even if the project continued, we would still be angry because where are we going to garden?" said Foroyati. "And the biggest problem is that even if we were given back the land, it's very difficult to cultivate it."

The singer has poured millions into helping children in Malawi, where 39 percent of the population lives on less than $1 a day.

In Namitete, west of Lilongwe, a dated picture of her with ex-husband Guy Ritchie in the background is on one of the noticeboards at the Mphandula Child Care Center which the singer bankrolled.

The community center feeds more than 200 children a day, with a class of grandmothers sitting in the shade and bouncing children who are learning a dance from a Japanese volunteer.

"I really appreciate that she came," said the center's program manager Jacinta Champomba, who has never heard Madonna's music but said she shared the idea of caring for orphans.

For the school, Madonna should have worked with an existing organisation that knows "what is actually happening on the ground", said Kalilombe who believes an orphanage is planned for the academy site.

"When a person of such stature comes in, people most only think of the money," he said.

"The idea was good. She had good intentions, but now to implement it on the ground, that brought a lot of complications."

Chief Kalenga said he wants to ask Madonna why the project failed.

"We felt happy that this is a person who was going to help us. We welcomed her as a fellow Malawian," he said.

"We are heartbroken because of the rumors we still hear about this project being stopped. We are demanding that Madonna should come and tell us what has happened. We don't want to hear it from rumors but we want her to come and explain to us."