In a Jerusalem Tunnel, a Glimpse of an Ancient War 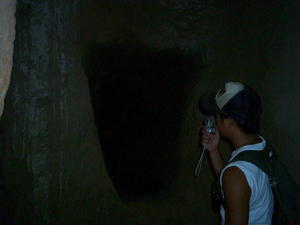 Archaeologists say artifacts discovered in an ancient drainage tunnel under Jerusalem are left over from war 2,000 years ago.

On Monday archaeologists presented a Roman legionnaire's sword and sheath found in the tunnel late last month. They believe it dates to around 70 A.D., when Rome put down a Jewish revolt, razing the second biblical Jewish Temple and much of the city.

Accounts of the battle say Jewish rebels fled to tunnels in a futile attempt to escape the Romans.

The newly excavated tunnel is part of a growing network of subterranean passages under the city.