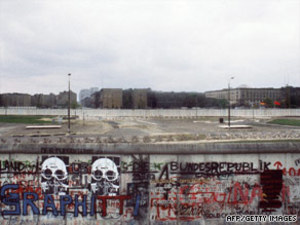 Fifty years after its loathed Wall went up, Berlin is gripped by a renewed desire to preserve the few remaining traces of the dark chapter of its division and bring history to life for visitors.

Of the 155-kilometer (96-mile) length of the Wall which made East Berliners prisoners of their own country, there is little more than three kilometers left -- a heritage authorities are now keen to protect.

This was not always the case in the years following the fall of the Wall on November 9, 1989 in the course of a peaceful revolution.

"In the early 1990s, 90 percent of Berliners were desperate to get rid of the Wall," Rainer Klemke, a city government's cultural affairs officer, told Agence France Presse ahead of the 50th anniversary of its construction on August 13, 1961.

He recalls that initial euphoria drove much of the destruction, as well as a fear that the border could be closed again if the Wall was still there to maintain it.

"Then in the 2000s, Berliners began asking what happened," he said.

This gave rise to the Berlin Wall Plan, adopted in 2006 by the city government comprised of a coalition of Social Democrats, leftists and former East German communists.

"The idea was to divide up the Wall sites in a thematic way," Klemke, who piloted the project, told AFP.

These included Checkpoint Charlie, the famous Cold War border crossing that saw a standoff of Soviet and American tanks in October 1961; the Brandenburg Gate, which stands for national unity; and Bernauer Strasse, the site of several dramatic escapes from the communist state.

A "Parliament of Trees" by artist Ben Wagin is dedicated to the estimated more than 600 people killed trying to flee, and the longest stretch of Wall still standing, the 1.3-kilometer East Side Gallery, is decorated with murals that cover different aspects of the city's tumultuous history.

Since 2006, pedestrians and cyclists have been able to trace the former border along a demarcated path called the Mauerweg.

The main museum and open air memorial, on Bernauer Strasse, the site of Saturday's official commemorations, has seen the number of visitors jump to 500,000 last year from 300,000 in 2009, said Sarah Bornhorst of the memorial foundation.

Following a recent expansion of the site, stretches of the Wall still standing there that were in danger of collapse are being restored using funds seized from the East German ruling party after national reunification.

Yet the long list of scattered memorials has not stopped tourists, who numbered a record 20.8 million last year, from asking "Where was the Wall?"

Markus Klug, a 28-year-old German visiting the capital, lamented the lack of relics.

"It just disappeared, as if it never existed. I would have liked to see a bigger piece of it, to see how it was before, with the guard towers and everything," he said, viewing a small slab of the Wall at Potsdamer Platz in central Berlin.

"When you arrive in Berlin, you obviously won't bump up against the Wall," Klemke admits. "It is not a question of the length (of the remaining traces) but of visual aids to explain how the structure worked."

He said a little curiosity coupled with a willingness to zigzag among the various sites would pay off in helping understand a fascinating period of recent history.

"If you can manage to interest people who have never immersed themselves in the subject, if only for a few minutes, that's a success," Klemke says.

He is upbeat about the prospects for keeping memories alive in Berlin, pointing to the still brisk sales of tiny pieces of the Wall -- albeit of dubious origin.

"It remains a symbol of hope for all oppressed peoples that translates around the world and for the young," he said.

And what about the young people on Potsdamer Platz who stick their chewing gum to the slabs? Klemke is not bothered.

"After all the Wall is not the Mona Lisa," he says.