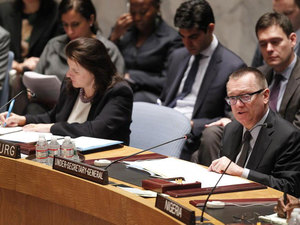 U.N. Under-Secretary-General for Political Affairs Jeffrey Feltman has urged Syrian authorities to respect Lebanon’s sovereignty, expressing concern over the impact of the fighting in Syria on Lebanon.

Feltman briefed the Security Council on Tuesday on the latest suicide bombings which the al-Qaida-linked al-Nusra Front has claimed responsibility for.

He also told Council members about the clashes between rival neighborhoods of the northern city of Tripoli and the rocket attacks from Syria and air raids carried out by regime warplanes.

Feltman said he was very pleased by the government’s focus on matters, among other, respect for U.N. resolutions – including resolution 1701, support for decisions taken under the national dialogue, and recognition of the importance of securing Lebanon’s borders.

Among other efforts exerted by the government are improving security and preparing for the presidential election process, he said.

“It remains important that all parties in Lebanon continue to work together in the same spirit under which the new government was formed in order to tackle the very significant security and humanitarian challenges the country faces,” he added.

An Nahar daily said Wednesday that the representatives of the permanent members of the Security council were in contact among each other and the Lebanese presidency and the premiership to avoid a further deterioration in the security situation.

The ambassadors warned that the recent road closures would have “uncalculated consequences,” the newspaper said.

The diplomats urged the security agencies to control the situation on the streets, it added.

Maybe the UN now ought to fit itself with real bones rather than the marshmallow version it suffers from. Everyone known that the Lebanese problem stems mainly from the fact that the Lebanese State is as marshmallow-ish as the UN is. The state has been overshadowed for decades by militias, yesterday it was the PLO, then the various Christian ones, then Hezbollah. The way out, the solution is in the UN helping the state reassert its authority fully and exert it contiguously over every inch of its territory, once done then the UN can forget about our woes and focus on other countries.

Correct SF, there's so much that needs to be done, the sooner, the better.