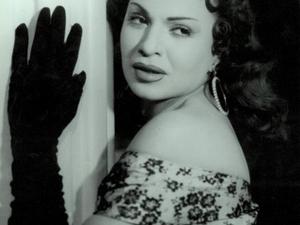 Hind Rostom, a legendary actress from the golden era of Egyptian cinema, has died in Cairo. She was 82.

With her blond hair and good looks, Rostom often played the sultry seductress, and quickly rose to stardom to become one of Egypt's best-known actresses.

She won popular acclaim for her 1958 film "Cairo Station" about the city's underclass and their struggles to survive. She starred in it with Youssef Chahine, one of Egypt's most lauded movie directors.

Among her other well-known films were "Love Rumor," and "Struggle on the Nile" with Omar Sharif — the country's most celebrated actor.

Born in Alexandria, Rostom defied her conservative upbringing to stake out a career in film. She was dubbed by fans the Marilyn Monroe of the Arabs and "the queen of seduction" of Egyptian cinema.

She quit acting in 1979 because, she said, she wanted the people to remember her as a beautiful movie star.

Her last public appearance came after Egypt's popular uprising in January that forced former President Hosni Mubarak to step down. She expressed worries over path of the revolution.

She was married twice. She is survived by her second husband and a daughter.