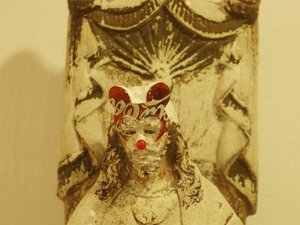 An art show featuring a poster of Jesus Christ with a wooden penis glued to his face was closed Tuesday after President Benigno Aquino intervened amid threats, vandalism and claims of blasphemy.

The closure came as a church group in the mainly Catholic country announced it was filing charges against the Cultural Center of the Philippines over the installation by local artist Mideo Cruz, which it said violated religion.

Aquino told reporters Tuesday he had called the government-run center the day before and told its staff he opposed the artwork.

"I did stress the idea that there are rights but if those rights hurt the rights of others, there is something wrong and that is not covered by the law. I reminded them that there is no freedom that is absolute," he said.

The cultural center said in a statement that threats to its board of directors had increased as media attention to the exhibit sparked religious outrage, prompting them to close the show.

"With an increasing number of threats to persons and property... the board of the Cultural Centre of the Philippines have decided to close down the main gallery," the statement said, without mentioning Aquino.

It did not specify the nature of the threats or say whether they were reported to police, but cited an incident on August 4 when a couple vandalized the controversial work and tried to set it on fire.

Catholic activist Jo Imbong said a case was being filed with the government ombudsman accusing the center’s management of violating a law against "immoral doctrines that violate religion.”

Imbong, executive director of a group of Christian lawyers, said that the center’s management would also face formal administrative complaints urging the government to suspend or fire those responsible.

"We are simply invoking what the law says. The law sets a standard not to offend religion. The law says freedom of expression is not absolute. There are limits to all freedoms," she told Agence France Presse.

The Poleteismo exhibition -- which also featured other artists -- opened on June 7 but media discussion increased in recent weeks, provoking a raft of condemnations.

In addition to the Jesus poster, Cruz's work included a cross made of discarded wood with a carving of a penis attached, and an icon of Jesus with a red clown nose and Mickey Mouse ears.

The center had earlier rejected calls for the exhibit's closure, saying it was covered by freedom of expression guaranteed under the Philippine constitution.