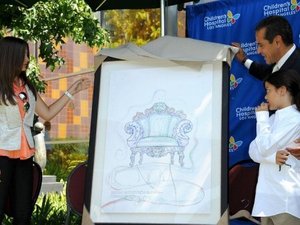 The children of the late "King of Pop" Michael Jackson delivered 10 pieces of art by their famous father to the Los Angeles Children's Hospital on Monday.

The artwork was donated by Brett-Livingstone Strong, an artist and friend of the Jackson family, who had them in his private collection.

"You look at this, it makes you happy," said Michael Jackson's sister La Toya at a ceremony at the hospital.

"They're whimsical, they're magical and there's just joy and peace," she continued.

"I know that when you see this and the kids see it, it will bring some type of joy to them, and at the same time, I know it will bring joy to my brother as well."