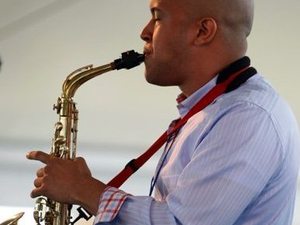 Four Latin Jazz musicians are suing the Grammy Awards for cutting their category from the list of awards handed out each year.

In a suit filed in New York state court, the musicians accuse the National Academy of Recording Arts and Sciences of threatening their careers by denying them the chance to win a coveted Grammy.

The academy cut Latin Jazz along with 30 other categories in a streamlined list that still tops out at 78 awards.

But in their suit, filed last week, the four artists say the changes unfairly derailed their career-long build-ups to becoming Grammy winners.

One plaintiff, Benjamin Lapidus, who heads a Latin Jazz group and has been an academy member since 2001, says he had been told he would have a chance for an award in the Latin Jazz category if he released his eight album, "Generaciones," this year.

Now, "Lapidus' album will not have a meaningful chance to compete," the suit says.

Another disappointed plaintiff, Eugene Marlow, had just recorded an album "A Fresh Take" with "the specific purpose of entering it into the Latin Jazz category to compete for a Grammy Award to be conferred by the Recording Academy in February 2012," the suit said.

The suit said the academy had determined back in 1995 that Latin Jazz was "a well-recognized, independent genre of music eligible for consideration for a Grammy Award."

That amounted to "long-overdue recognition to the highly-regarded artistic work of musicians who blended the improvisatory leaning of jazz with the native music and cultures of the Caribbean and Central and South America."

In a statement, the academy said: "The Recording Academy believes this frivolous lawsuit is without merit, and we fully expect to prevail."