U.S. Yoda Statue is a Mecca for Star Wars Fans 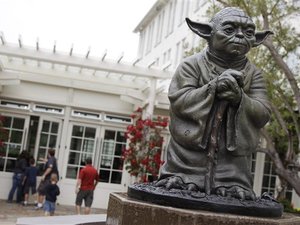 Within sight of the Golden Gate Bridge lies another landmark cherished by a small but fervent group of travelers: a life-sized replica of Yoda, George Lucas' master of the Force.

Since the statue of the Jedi sage went up amid the Presidio's landscaped lawns in 2005, Star Wars fans have made a pilgrimage to take pictures with their beloved character and take in Lucasfilm Ltd.'s sleek headquarters.

Given the franchise's huge impact, not only on pop culture but on the tourism industry, the diminutive Yoda fountain is just one of dozens of location shoots and special sites visited by Star Wars acolytes.

Others include Luke Skywalker's desert home in Tunisia, Guatemalan pyramids and a Tuscan lakefront villa.

For the Van Zwieten family of Oploo, Netherlands, a stop to see the pointy-eared master was a key part of their summer holiday in the United States.

"The Dutch guidebook said 'Love it, you will,' and we decided we had to come," said Tom Van Zwieten, a tax attorney who has also visited another shoot site in Tenerife, and who brought up his children watching the trilogies.

In "The Empire Strikes Back," Yoda builds Luke's confidence to harness the Force, an energy field that Jedis use to perform supernatural feats.

"You must unlearn what you have learned," he tells Luke. "Luminous beings are we, not this crude matter. You must feel the Force around you."

Some visitors to this corner of the park, flanked by towering palms and eucalyptus groves, hope to absorb such lessons through sheer proximity to the statue, poised atop a rushing fountain.

"Yoda is the source of wisdom and gravitas for the whole trilogy," said fan Dale Tolosa, 37, an underemployed actor who often dresses as a Star Wars biker scout with his chapter of the 501st Legion, an international, all-volunteer costuming group. "It's almost like he's a religious symbol or the Statue of Liberty, or a representation of all the positive fantasy that George Lucas has brought to the world since 1977."

Tolosa and his older brother, Matt, who dons the tunic of Luke's father Anakin Skywalker, also have visited numerous other location shoots, and are planning a trip to Death Valley, where R2D2 cruised the sand dunes.

Gus Lopez, a Star Wars collector in Seattle who runs an online memorabilia museum, has already been there, as well as to the Yoda fountain and to nearly every major Star Wars location shoot the world over, including sites in Norway and the Arizona desert.

Lopez's favorite? A redwood grove near Crescent City, California, where Lucas filmed the speeder bike chase scenes for "Return of the Jedi."

"It took friends and I a year to research and find the location because the forest that got logged looks so different today," said Lopez. "For all of these sites, it's about how you connect with the movies and how you actually feel like you're closer to it by being in a place that was involved in making them."

Some passionate fans choose to get directly involved at the locations they visit.

Belgian fan Mark Dermul has been raising money to visit the Tunisian salt lake Chott El-Jerid, which Lucas transformed into the desert planet of Tatooine. So far, nearly 400 donors have contributed $10,994 to repair the weather-worn plaster, wood and chicken wire holding together the iconic "Lars Homestead" where Luke Skywalker was raised, and fans plan to do the restorations next summer, Dermul said.

Along with an entree into the fantasy world, other filming sites offer tourists special services and accommodations.

On the sweeping grounds of Villa del Balbianello, visitors can get married in the setting overlooking Italy's Lake Como where Queen Padme Amidala married Anakin in "Star Wars II: Attack of the Clones".

The epic film series has spawned a franchise including collectables, books, television series, video games, and comic books that Forbes magazine estimated in 2007 had earned more than $22 billion.

Lucasfilm is among several businesses and nonprofits that have relocated to the Presidio, the one-time military base turned national park overlooking the bay and the Pacific. Run-of-the-mill fans, however, aren't invited past the plush company lobby without invitation.

"The Yoda fountain is the public face of Lucasfilm, the one picture-taking opportunity that they have with something from Star Wars," says Steve Sansweet, a fan relations adviser to Lucasfilm who houses a trove of collectables on his land in Northern California, dubbed Rancho Obi-Wan.

Jay Shephard, a manager at an online testing company in Baltimore, went a step further, calling the fountain a mecca for fans.

"Yoda's like what I would like to aspire to be in the way that I live my life and the way I raise my kids," said Shephard, who founded a fan site called Theforce.net. "Here's this little guy who's really unassuming, and you think 'how could this little creature be a warrior'? But the messages he shares with Luke in the movie really resonate with all of us."