No Shame for Religious Killings in Indonesian Town 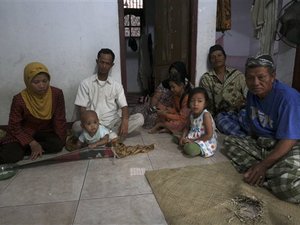 When Dani bin Misra was released from prison last week after serving just three months for smashing in the skull of a member of a Muslim sect, this conservative Indonesian town let out a triumphant cry.

The ferociousness of the attack, captured on video and circulated widely on the Internet, guaranteed no one from the Ahmadiyah group would dare set foot in Cikeusik again, the 38-year-old farmer said as others nodded in agreement.

Their reaction is part of a wider wave of intolerance against religious minorities that is challenging Indonesia's image as a beacon of how Islam and liberalism can coexist.

Once the preserve of hard-line preachers, the hatred of Ahmadis now seems to be spreading among ordinary people in pockets of the world's most populous Muslim nation. Whether the government can check this and other intolerance could be key to how Indonesia, home to 240 million people and one of the world's fastest growing economies, evolves in the 21st century.

There are reasons to worry, analysts say.

President Susilo Bambang Yudhoyono, who relies heavily on Islamic parties for support in parliament, has remained silent as hard-liners shuttered Christian churches, threw Molotov cocktails at one of their theology schools, and attacked worshippers and priests with knives and clubs as they headed to morning prayers.

A string of attacks on the Ahmadiyah — including the torching of mosques and homes — only got worse after a 2008 government decree that said those who follow their practices or proselytize could face up to five years in prison.

Soon after, residents in Cikeusik, a rough-and-tumble farming community less than 120 miles (200 kilometers) from Jakarta, elected a new village chief, Muhammad Johar — the only candidate pledging to take a tough stand against the sect.

Many mainstream Muslims consider the Ahmadis heretics because they do not believe Muhammad was the final prophet.

In the eyes of the villagers, Dani and other members of the frenzied mob who killed three Ahmadis in February were just helping get the job done. Six were wounded, and the others fled with only the clothes on their backs, their houses destroyed and looted.

"I do feel bad people had to die," said Asep Setiadi, 40, as he headed out to his rice field. "But I'm grateful that they're finally gone."

Twenty-eight-year-old Siti Zubaidah, holding her baby girl in a sling as she chatted with a neighbor, had nothing but praise for Dani.

"We had to clean our village," added Wildan bin Satim, 72. "This is no place for the followers of a cult."

The Ahmadiyah, established in 1889 in India, consider its founder Mirza Ghulam Ahmad to be a savior and messiah, counter to traditional Islamic teaching. They have tens of millions of members worldwide and around 200,000 in Indonesia.

They were not always unwelcome in Cikeusik, where men carry swords as they walk the dusty, potholed roads after nightfall to ward off beggars, thieves and other potential troublemakers.

Matori Abdullah was the first Ahmadi to arrive.

He, his wife and eight children lived peacefully alongside other Muslims in the 1980s and early '90s, attending the same mosque and religious ceremonies.

But the situation began to deteriorate after the ouster in 1998 of longtime dictator Suharto, who had suppressed hard-liners and even discouraged the wearing of headscarves by women.

Conservatives in Cikeusik used a newfound freedom of expression to insult the Ahmadiyah, who by then numbered about 35, most of them part of Abdullah's extended family.

Clerics raised questions during sermons about the validity of their faith, and residents whispered as they passed in the streets.

"Sometimes teachers would tell the class the Ahmadis are heretics," said 15-year-old Arief Muhammad Zainal, now living in fear in the outskirts of Jakarta with others from the village. "The other students would point and stare. Other times kids would pinch or slap me, muttering 'Ahmadiyah boy' as they passed."

Over time, the Ahmadis started to withdraw. In 2009, they used a $15,000 donation to build a concrete house for their religious ceremonies and stopped going to the mosque.

"They refused to pray with us," said Johar, the village chief. "So how should we consider them as Muslim?"

Visitors would flock to the house from neighboring towns, sparking rumors they were trying to recruit new members.

On Feb. 6, as the Ahmadis were preparing to entertain guests from Jakarta, a mob of 1,500 from Cikeusik and neighboring villages approached with machetes, rocks and wooden clubs.

They surrounded the house and set it ablaze.

Women and children fled, screaming. Some of the men stood firm, fighting back with whatever they could grab, but they were far outnumbered.

By the time a video camera was rolling, two men lay naked and lifeless in the mud. The attackers continued to hammer their bodies with bamboo sticks, each thud met with a cheer.

Dani, wearing a black leather jacket and a white skull cap, was the most brutal. The 17-year-old smashed a rock repeatedly into the skull of Roni Pasaroni as the crowd yelled "Allahu Akbar" or God is Great.

The attack, just a few months after U.S. President Barack Obama held up Indonesia as an example of religious tolerance, sparked global condemnation.

In a rare departure, Yudhoyono called for the perpetrators to be caught and punished, leading to the arrest and trial of Dani and 11 other suspects.

But human rights groups say police, under pressure by hard-liners, did not carry out a proper investigation. Prosecutors, claiming the Ahmadis were instigators, didn't call key eyewitnesses.

The relatively lenient sentences handed down last week — three to six months — surprised even Dani's family. Taking into account time served, the teen was released almost immediately. He returned to the nearby village of Cikadu, where he was shielded from the media by his parents.

The Ahmadis from Cikeusik are in hiding. "We live in fear now," said Nayati, a mother of four. "Everyday we are afraid they'll find us and kill us all."