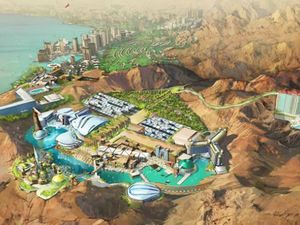 The "Red Sea Astrarium" will be built in the country's sole port of Aqaba, 350 kilometers (217 miles) south of Amman, spanning 184 acres (74.4 hectares), and will include a Star Trek-themed centre.

"Revolving around ancient history with Nabatean, Babylonian, British and Roman influences," the park is scheduled for opening in 2014, according to Jordan's Rubicon Group Holding (RGH), which announced the plan.

Bordering Israel, Egypt and Saudi Arabia, Aqaba is a popular tourist center and close to the ancient rose-red Nabatean city of Petra and Wadi Rum in the desert.

RGH said in a statement the park would include "technologically advanced attractions, five-star accommodation, captivating theatrical productions," and night-time spectacles.

It said RGH, CBS Consumer Products and Paramount Recreation will create the Star Trek center, which "will deliver a variety of multi-sensory 23rd-century experiences, culminating with a state-of-the art space-flight adventure."

According to RGH, the astrarium "will be the world's only place where there is a Star Trek attraction," after a similar facility in Las Vegas closed.

King Abdullah is an acknowledged fan of the Star Trek phenomenon.

In 1996, while he was still a prince, 34-year-old Abdullah made a non-speaking appearance in the Star Trek: Voyager episode "Investigations."

It is unclear how the theme park project will be funded, but the King Abdullah II Fund for Development (KAFD) has been approached to help finance it.

"We have not made a decision. We are in the evaluation phase and the project is currently under review by the board," KAFD Executive Director Tarik Awad told Agence France Presse.

The park will include four hotels, generate 500 jobs and "serve as a model for green energy," RGH said.

"The project, a milestone in the development of tourism in Jordan, will provide a progressive and entertaining celebration of the region's culture and heritage," it added.

Clearly this british king has no relation to this fathers people, the bedouins. This theme park is idiotic to say the least. Go feed your people instead. This just prooves how a dictator will always be crazy regardless if he comes in the bedouin form like his brutal father or in the britsih form like this elton john king.