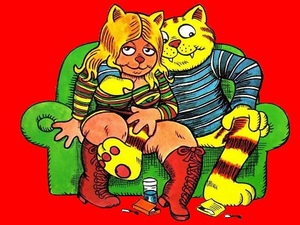 American graphic artist Robert Crumb, famous for his subversive comic drawings, has pulled out of a visit to Australia because of fears for his safety, reports said Wednesday.

Crumb, known for his "Fritz the Cat" comics, cancelled his appearances at the Graphic 2011 festival in Sydney for "personal reasons", organizers said.

Gary Groth, a long-time friend of the artist, told the Sydney Morning Herald that Crumb had been wary of facing a hostile public over his controversial images.

"He doesn't want to cross a picket line. It only takes one person to punch him out and ruin his Australian trip. I'm sure he's thinking it's just a gigantic hassle," Groth told the paper.

Crumb, who was depicted in the 2003 film "American Splendor", had been considered a coup for the festival at the Sydney Opera House.

But organizers' joy turned sour after an Australian tabloid report described the artist as a "self-confessed sex pervert".

Under the headline "Cult genius or filthy weirdo", the article went on to quote an anti-child abuse campaigner saying Crumb's work featured "perverted images emanating from what is clearly a sick mind".

Graphic 2011 co-curator Jordan Verzar said it was a "very, very disappointing situation" that Crumb had withdrawn.

"There were a legion of people eagerly anticipating his visit," he said in a statement.

"I sincerely doubt that he will ever make it to Australia now."

In publicity for the event, organizers had described Crumb as a "controversial and seminal underground American comic artist" who had been hailed as a genius and a revolutionary.

But it also warned that some people might find some of the event's content disturbing, adding that it was not likely to be suitable for those aged under 15.

The hero of underground comics wowed the comic world in the 1960s with characters including "Fritz The Cat" and "Mr Natural".