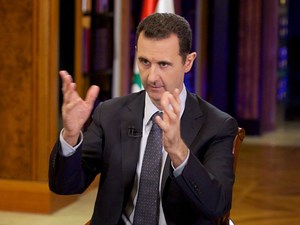 Syrian President Bashar Assad said Wednesday that key ally Moscow had helped re-establish "a multipolar world", as he met with a high-level Russian delegation in Damascus.

The delegation was delivering a message from Russian President Vladimir Putin, who has provided political, military and financial backing to Assad's regime since the outbreak of a revolt in March 2011.

"The important role that Russia is playing on the international scene is today making a clear contribution towards drawing up a new map for a multipolar world," Assad was quoted by state news agency SANA as saying.

Assad has previously expressed his support for Russia's actions in Crimea, which have drawn Western sanctions and a backlash from NATO.

Russia, Assad added, is helping "achieve international justice, in the interests of states and people who believe in their sovereignty and independent decision-making."

He "expressed appreciation for Russia's positions and for its support for Syria, and satisfaction with the level of cooperation... under way between the two friendly countries."

Syria has since the start of the revolt claimed that regional and Western powers, chiefly Turkey, Saudi Arabia and the United States, are to blame for a "terrorist" plot targeting the country.

SANA said Assad made his comments Wednesday morning, during a meeting with the Imperial Orthodox Palestine Society.

The Russian organization is headed by former prime minister Sergei Stepashin, who was in Damascus to deliver a message from Putin.

According to SANA, the message "reaffirmed his country's determination to continue to support the Syrian people's resilience in all areas, in the face of the war it is waging against the international terrorism supported by some Western and regional countries."

Syria's war has killed more than 150,000 people and forced nearly half the population to flee their homes.

Yes President Assad, Russia cares about you as much as it cares about North Korea and other "polarized" dumps.

lol... you really didnt get the point did you?

lol, what a smartie. i must say i'm impressed, must be the first time you use google! i understand your excitement, but dont get too carried away! a couple of figures (GDP and def expenditure) are far from enough to grasp the full picture.

but first, try googling "multipolar", and compare the results to those of "bipolar". yes, bravo! you did it! it takes more than 2 powers to be "multi". so china if china is n2, it takes a n3 to have a multipolar world.

also, as i said above, it's not a question you can answer with a couple of numbers and a childish bragging about "who's got the biggest".
the world being "multipolar" depends on a zillion other things, like the involvement or not in world matters, the will and ability to challenge and oppose established powers, the attitude and strategic flair of other powers etc etc etc...

if there are many powers but they all collude into the same plan, or if one power makes all the decisions on the global level while the others remain neutral, no matter how big their weiner is, then the world wouldn't be multipolar.

whether you like it or not, russia is playing a major role around the globe, including south america, asia, the middle east and europe, and they ARE challenging the US, more than China actually.

That your masters in the US, doesn't see Russia as a super power, proves how blind they are Mr. American. It's your beloved west that gets weaker, while the Eastern countries gets stronger. What did NATO when Crimea rejoined Russia? Other than no important sanctions and big words.

You seem very self confident in your country. So let's talk about economy, what makes you think the west EU etc. Has anything to offer Ukraine? They do not have gas lines or anything going through Ukraine, they do not even let Ukraine become an EU country. Russia just stopped giving discounts on their Gas, just like Syria did when they left Lebanon. Nothing good will happend to the Ukrainian people, other than Far right groups, chaos and empty western promises.

Ukraine rely on Russia, Russia didn't rely on Ukraine. Just like EU needs Russias natural resources. Their sanctions only backclashed, and now the West seeks new diplomatic solutions with Russia, US economies are dead. You wasted them on wars you didn't belong in.

Well would've been nicer if the US. Didn't interfeer in Ukraine themselves then it wouldn't have been so bloody. Just like they destroyed Libya, Syria, Iraq, Yugoslavia, they destroyed Ukraine.

So what is the West going to do? Ukraine has billions of dollars in dept. Just like the USA themselves have, what are you going to do Mr. American? Lend more money, so you can save Ukraine from bankruptcy?

Well i saw the American Marines roll over Iraq with their heavy tanks and bombs, and i Saw the Russian marines "Invade" without firing a single bullet or bomb anywhere on the peninsula. You Americans were always the agressors, there is millions of Russians in Ukraine, how many Americans lived in Afghanistan, Iraq and Libya? You Americans are indeed real hypocrites.

Peaceful protestors? They were armed to the teeth, and beated up Police officers with sticks and knives, American propaganda once again, just like with Syria. You should take a look at some pictures and videos from the protests there, I don't think you really know what happend.

Mr. American, your whole history is build on the blood of African American slaves, and the unarmed native Americans you massacred.

American, I am not an Iraqi, but i do know many Shi3a in Iraq, were against the American Invasion, and so was i. America went into Iraq to suck it's oil out, not to get rid of Saddam, because you were the ones that put him on the seat to begin with, just like you financed and armed him against Iran in the 80's, don't give me this garbage that people give baklawas, or that we throw rice at Israel tanks, I heard this Western Takfirism before, you forget many groups in Iraq, fought against both Saddam & the American invaders, such as Jaysh Al Mahdi, and other Shi3a groups too.

Many Sunnis and Shias actually joined forces against the Americans doing the Iraqi war era.

Baschar then added, "And we support Putin's re-establishment of shipments of multi-headed missiles which is helping us murder our own people with greater efficiency". He then further added, "And as Russia has shown by blatantly defecating on International Law and annexed Crimea using the "historical" alibi, so shall we. Lebanon, I'm looking at you. Get back to becoming a back-province of Syria like you were in the Ottoman era." At which point he turned back to his TV screen and masturbated to the point of injury while watching footage of dead Syrian children.