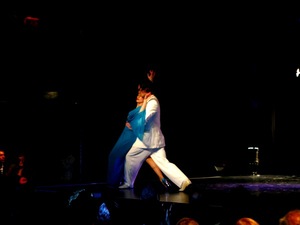 About 400 couples are competing in this year's World Tango Championships beginning next week in Argentina's capital, organizers said Wednesday.

More than 500 artists also will participate in the festival that starts Tuesday and runs through Aug. 30.

But the main draw is the dancing, in the traditional "salon tango" category and the more creative "stage tango" competition. Each winning couple gets a prize of 20,000 pesos, which is about $4,800.

Tango is taken seriously in Buenos Aires. The event is organized by the city's culture minister and is completely free to the public. Last year's event drew 350,000 spectators, and competitors come from many countries.

"It totally changed our lives," said Sebastian Jimenez, 19, who with government support has spent the past year traveling to events with his dance partner, Maria Ines Bogado. "The government helped us in the first steps. It was something beautiful."

Bogado, 30, said she's excited to be competing in Argentina again, but humble about their chances: "Right now we're almost nothing."

The United Nations added the Argentine and Uruguayan tradition of tango to its "Intangible Cultural Heritage of Humanity" list in 2009 after both countries gave up their rivalry long enough to campaign together for the honor.

Tango is the embodiment of the "criollo" culture of Europeans and natives who settled around the Rio de la Plata. Born at the end of the 19th century, the music and dance reflect the passion, drama and melancholy of their experience.

The tradition was nearly forgotten, however, until singer Carlos Gardel popularized it in Europe and then brought it back home.

Now tango is celebrated worldwide, with many top dancers coming from Japan.

"In August every year this event brings together a whole community of musicians, dancers, academics and entrepreneurs," Mayor Mauricio Macri said in a statement. "We are united by a past, a common history and confidence in the future."